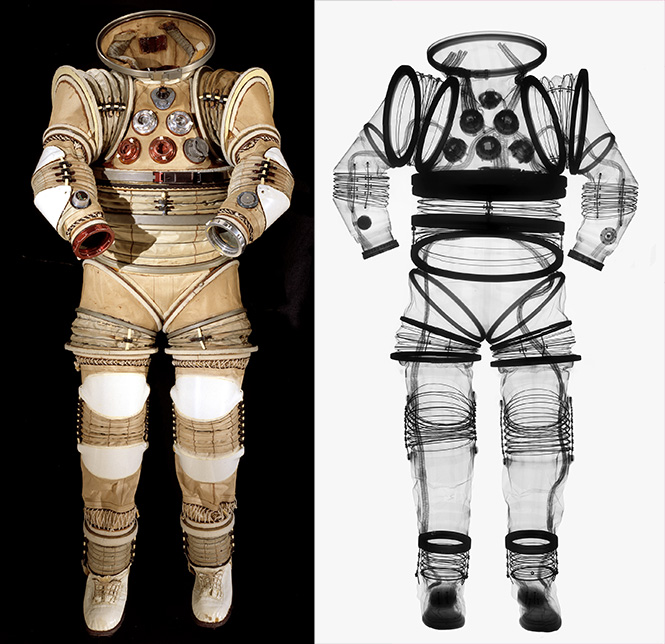 It was one of those happy accidents.

When X-raying spacesuits at the Smithsonian’s National Air and Space Museum in 2008, photographer Mark Avino and conservator Ron Cunningham noted how artistic the gear appeared in scans. They were the first to practice using X-rays on historical space objects for further study. Fast forward to 2011 when the images were paired with their respective spacesuits for a traveling exhibit.

“Suited for Space” is an exhibit that explores the design and innovation inside a spacesuit. It features gear like the one pictured above, the EX-1A Apollo Applications Project suit. Built in 1968 as part of a program to develop spacesuits that could endure longer stays on the moon, it used materials that could operate at higher pressures.

The traveling exhibit highlights not only the astronauts who wore the spacesuits, but also the designers behind them that allowed humans to explore and survive on another planet. To learn more about astronauts and the team behind them, visit that National Air and Space Museum’s website on 50 Years of Human Spaceflight.

The exhibit will come to the eighth stop of its 13–city tour in Washington, D.C., at the National Air and Space Museum July 26–Jan. 21, 2014. It will then continue its tour across the country until 2015. The exhibit was organized by the Smithsonian Institution Traveling Exhibition Service (SITES) in partnership with the National Air and Space Museum.