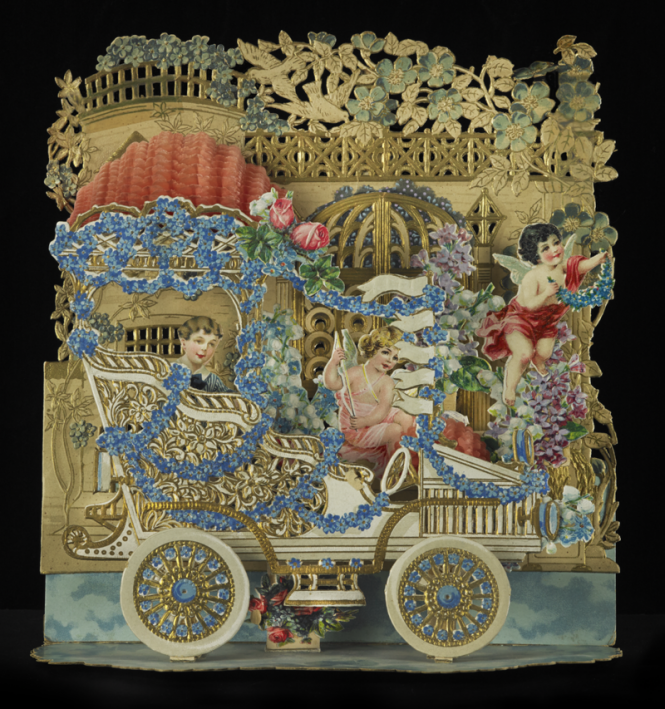 This special Valentine’s Day card has a long history in the Ream family. David Ream and Marion Hartman were married in 1915, and although it’s not known when David presented the card to Marion, Marion displayed it in their Pennsylvania home every year to celebrate Valentine’s Day. The tradition was continued by their granddaughter Pat Compher who donated this card with its family story to the Smithsonian’s National Museum of American History in 2013.

The card unfolds to stand upright, revealing a background of die-cut trellises adorned with swags, or chains, of flowers, while a young man arrives by automobile with flowers to woo his lady love, a cherubic Cupid hovering nearby. The museum’s transportation curator Roger White dates the vehicle to about 1900, which is consistent with the period of the Reams’ courtship.

Many greeting cards, postcards, calendars and other colorful advertising and trade items like this one were made in Germany for an international market from about the 1880s to World War I. No maker’s name appears on the card, but it says “Printed in Germany,” which suggests it was made before 1915. Elaborate die-cut motifs and multiple colors were specialties of the German printing industry at the time. This card was relatively expensive; it cost $1, much more than the “penny” valentines exchanged by school children.

The card is not currently on display, but for more information about it, visit http://americanhistory.si.edu/blog/2014/02/a-lush-valentine-and-family-treasure.html. The museum also has thousands of greeting cards in its Archives Center.