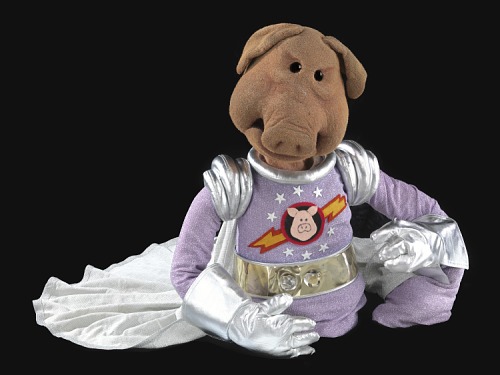 Pictured is one of the pig extras from the recurring “Pigs in Space” sketch from The Muppet Show, a half-hour variety show featuring the Muppets that aired from 1976 to 1981. The sketch followed the main characters Captain Link Hogthrob, First Mate Piggy and Dr. Julius Strangepork leading a crew of pigs aboard the Swinetrek in a parody of Star Trek, Lost in Space and other space-themed shows of the 1960s and ’70s.

NASA had a tradition of waking up its space shuttle crews with stirring music, song lyrics or comedy routines to boost morale and boost camaraderie between the astronauts and mission control. On Nov. 13 and 14, 1981, the Swinetrek boldly went where no pigs had gone before as the crew of the Space Shuttle Columbia was awoken by two specially recorded greetings from “Pigs in Space” Muppet performers.

To see more pigs in the Smithsonian collections, visit our Smithsonian spotlight celebrating the Year of the Pig (Feb. 5, 2019 to Jan. 24, 2020).