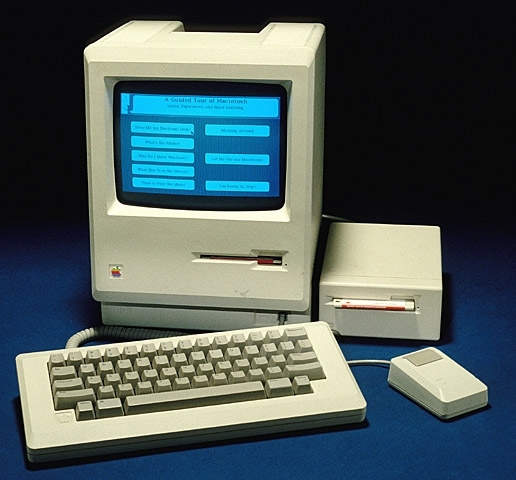 In January 1984, Apple Inc. introduced a graphic user interface to the Apple line of computers. The idea had originated at Xerox's Palo Alto Research Center in the 1970s, but Xerox was slow to commercialize it. Apple proved far more successful when it introduced the Macintosh Jan. 22, 1984, with a splashy television advertisement during Super Bowl XVIII. The original price was around $2,500.

Instead of typing out names of programs on command lines, users with a GUI could click "icons," or pictures, that represented the programs they wanted to run. They could also execute functions like saving, moving or deleting files by clicking and dragging the icons around the screen with a pointing device called a mouse. Apple's version of the mouse had a single button, which became an Apple standard.

The first Macintosh had only 128K RAM, and users quickly found this insufficient. The Macintosh 512 KB, nicknamed "Fat Mac," was introduced in September 1984. It gave users four times as much memory and allowed them to keep several major programs open simultaneously. The vertical processor case and 9 inch monochrome screen were distinguishing features of all the early Macintosh line.

The Macintosh 512 KB contained a Motorola 68000 microprocessor that ran at 8 MHz. It contained 512 KB of RAM, 64 KB of ROM and initially had a 400 KB floppy disk drive. Applications included MacWrite, a word processor, and MacPaint, a drawing program that turned the mouse into a paintbrush.

Shortly after the 512 KB appeared, Apple also introduced a LaserWriter printer, which enabled desktop publishing for individuals and small businesses.

Apple discontinued the "Mac Classic" line of computers in April 1986.