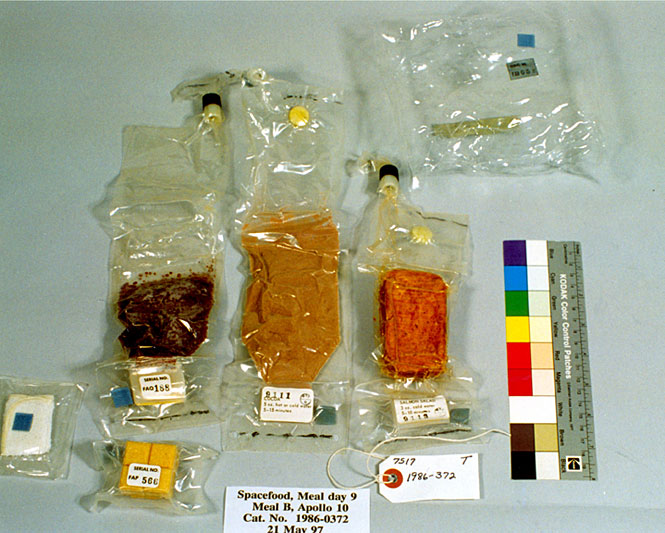 This week’s Smithsonian Snapshot marks the May 18, 1969, launch of the Apollo 10 mission.

The Apollo 10 spacecraft launched from Cape Kennedy at 12:49 p.m. EST with commander Thomas Stafford, command module pilot John Young and lunar module pilot Gene Cernan. This liftoff marked the fourth Apollo launch in seven months. Its purpose was to serve as a complete dry run for the Apollo 11 mission, the first mission to land humans on the Moon.

Each crew member was supplied with three meals per day, which provided approximately 2,800 calories. This photo shows John Young’s Meal B lunch for mission Day 9. The mission only lasted eight days—he did not eat this food, but astronauts were provided extra supplies if they had to stay in space longer. It contains cocoa, salmon salad, sugar cookie cubes, grape punch and hand wipes.

Meals were sorted by day and designated for each astronaut with a corresponding piece of Velcro—white for mission commander, blue for command module pilot and red for lunar module pilot.

This meal package allows Smithsonian curators to demonstrate the special packaging and food processing required for eating in the reduced gravity of space.

To learn more about it, visit the National Air and Space Museum’s website.