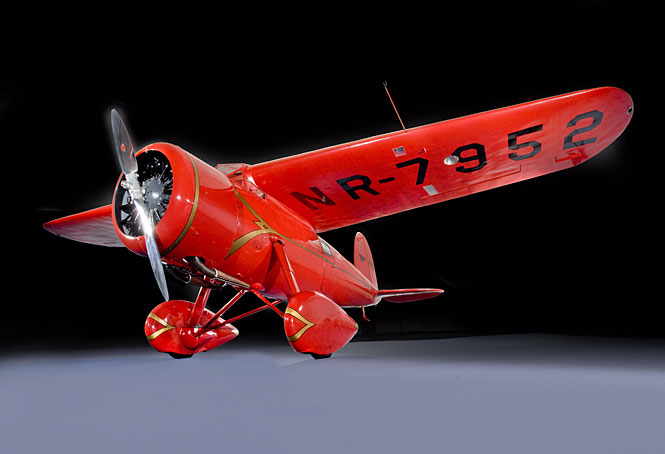 On May 20 - 21, 1932, Amelia Earhart became the first woman—and the second person after Charles Lindbergh—to fly nonstop and solo across the Atlantic Ocean.

Flying this red Lockheed Vega 5B, she left Harbor Grace, Newfoundland, Canada, and landed about 15 hours later near Londonderry, Northern Ireland. The flight made Earhart an instant worldwide sensation and proved she was a courageous and able pilot.

Later that summer, Earhart flew the Vega setting another record. On August 24 - 25, 1932, she made the first solo, nonstop flight by a woman across the U.S., from Los Angeles to Newark, N.J. The flight covered a distance of 2,447 miles and lasted about 19 hours.

In June 1933, Earhart sold this Vega to Philadelphia’s Franklin Institute where it remained until transferred to the Smithsonian in 1966. In 1976, the sleek Vega was installed in the new National Air and Space Museum to recognize Earhart’s flights. The innovative combination of an internally braced wing and strong shell fuselage made the design a popular record-setting, private and commercial aircraft.

This item is one of 137 million artifacts, works of art and specimens in the Smithsonian’s collection. It is on display in the Barron Hilton Pioneers of Flight gallery at the National Air and Space Museum.

To learn more about Earhart’s first transatlantic flight and the mail she transported, visit the National Postal Museum’s website.