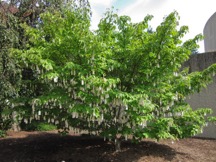 The Smithsonian’s Hirshhorn Museum and Sculpture Garden will open celebrated artist Yoko Ono’s interactive “Wish Tree for Washington, DC,” in time for the Independence Day weekend. While visitors are encouraged to whisper their wishes to the tree year-round, from July 1 through Labor Day, the Wish Tree will bloom with paper tags, as the artist invites museumgoers to write and hang written wishes from its branches.

“The participatory nature of the Wish Tree creates a sense of unity, inspiring the thousands who come from around the world to take part in the piece,” said Melissa Chiu, the museum’s director. “Through such a simple act as wishing, we experience a collective, and powerful, hope for the future.”

Hirshhorn staff will collect, or “harvest,” nearly 8,000 wishes throughout the summer, sending them to become part of Ono’s “Imagine Peace Tower” in Reykjavik, Iceland. “I hope Imagine Peace Tower will give light to the strong wishes of world peace from all corners of the planet and give encouragement, inspiration and a sense of solidarity in a world now filled with fear and confusion,” Ono has said.

One of many Wish Trees around the world, the Hirshhorn’s is the only permanent tree in the U.S. The white-flowering Japanese dogwood was donated by the artist in 2007, honoring Japan’s gift of cherry blossom trees a century prior.

On Friday, July 1, at 12:30 p.m., the public is invited to join Hirshhorn chief curator Stéphane Aquin for a gallery talk on “Wish Tree for Washington, DC” and Ono’s related projects.