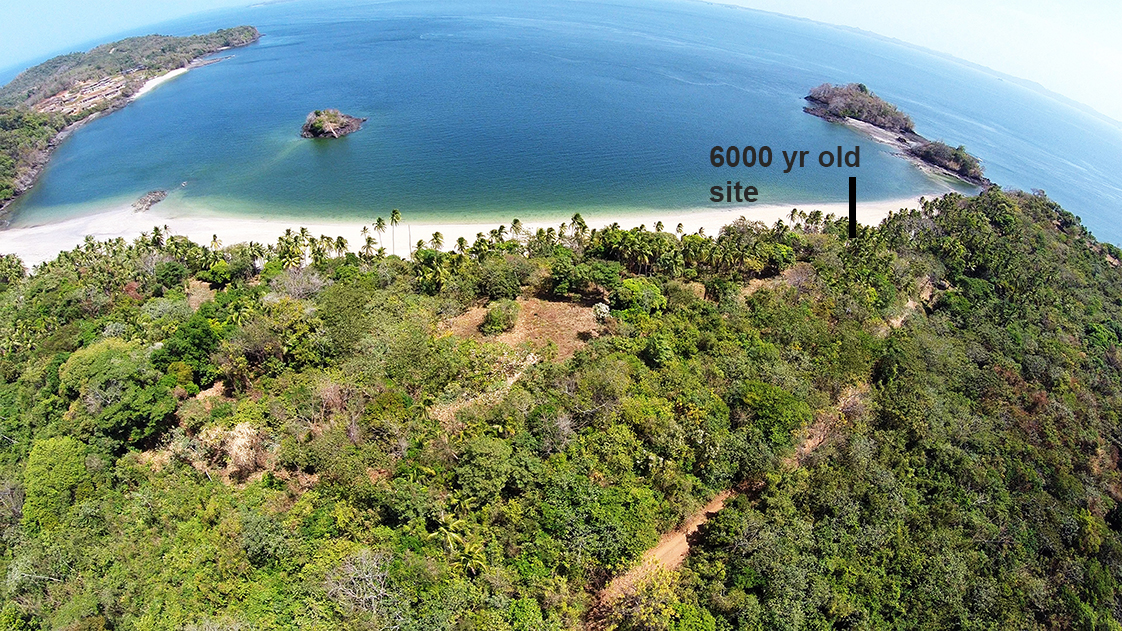 Precolombian seafarers left what is now mainland Panama to settle on Pedro González Island in the Perlas archipelago about 6,000 years ago, crossing 50–70 kilometers (31–44 miles) of choppy seas—probably in dugout canoes. Dolphins were an important part of the diet of island residents according to Smithsonian archeologist Richard Cooke and colleagues from the Cotsen Institute of Archaeology at UCLA and Colombia’s Universidad del Norte.

According to the results of recent excavations, published in Journal of Archaeological Science Reports, 8 percent of the mammal specimens—bones and teeth—recovered from a prehistoric scrap heap, or midden, belonged to dolphins. No other known settlement in Central America shows evidence of systematic dolphin consumption. The absence of dolphins in the diet of precolombian peoples is usually attributed to the difficultly of navigating canoes and spearing dolphins at sea.

Researchers have yet to find artifacts that indicate systematized hunting—evidence of nets or spears, for example—though one dolphin skull had a puncture wound inflicted by a blunt-pointed tool.

Seasonal upwelling brings nutrient-rich water to the Gulf of Panama. This attracts huge schools of fish, which hungry dolphins follow into shallow water, bringing them close to shore. There were also teeth from 2.5 to 3.5-meter-long tiger sharks in the midden. If sharks were pursuing pods of dolphins, they might have been driven even closer to the shoreline.

But natural stranding of dolphins is also probably not enough to explain the abundance of bones in the midden. Cooke believes there is another explanation: Islanders could simply have positioned their canoes at the entrance to the u-shaped Don Bernardo Beach to wait for the dolphins to swim into the inlet. By creating noise to disorient the dolphins and drive them on shore, they could easily have harvested them. Similar corralling methods are used in the Solomon Islands today.

The earliest settlers of Pedro González Island certainly hunted the island’s fauna, including pygmy deer. They were also agriculturalists. The midden shows the first evidence for the cultivation of maize on Central American platform islands consistent in time with the mainland data. The archaeological record includes turtle and fish bones and shellfish remains, suggesting the people were able fishers—though evidence of nets or fishhook technology has yet to be found.

In 2016, Pearl Island Inc., a development company, financed a four-month salvage of parts of the site in accordance with Panama’s cultural heritage laws. Further excavation on Pedro Gonzalez Island and its larger neighbor, Isla del Rey, may paint a more detailed picture, including why these islanders disappeared after about 800 years. Newcomers settled the island a few thousand years later, but the record of their time shows no dolphin use.

“I would argue, though it’s speculative, that the retention of dolphin hunting is probably due to an early circum-Pacific maritime adaptation by humans,” Cooke said. “Even though with the data we have we cannot really prove they were hunting. But the age of the site puts it at a time when people all around the Pacific Rim—in Mexico, Chile and Japan—were hunting dolphins.”

The Smithsonian Tropical Research Institute, headquartered in Panama City, Panama, is part of the Smithsonian Institution. The Institute furthers the understanding of tropical nature and its importance to human welfare, trains students to conduct research in the tropics and promotes conservation by increasing public awareness of the beauty and importance of tropical ecosystems. Website: www.stri.si.edu.