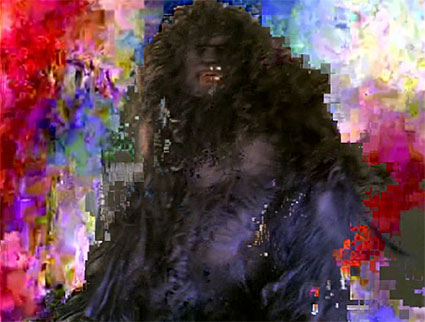 “Watch This! Revelations in Media Art” presents pioneering and contemporary artworks that trace the evolution of a continuously emerging medium. The exhibition celebrates artists who are engaged in a creative revolution—one shaped as much by developments in science and technology as by style or medium—and explores the pervasive interdependence between technology and contemporary culture.

The exhibition, on view at the Smithsonian American Art Museum from April 24 through      Sept. 7, includes 44 objects from 1941 to 2013, which were acquired by the museum as part of its longstanding commitment to collecting and exhibiting media art. The exhibition marks the first time that 30 of these works will be on display at the museum.

“Watch This!” is organized by Michael Mansfield, curator of film and media arts. The museum is the only venue for the exhibition.

The second half of the 20th century introduced an array of technologies and electronic phenomena that set art in motion. Innovations in high-fidelity stereo, broadcast television, videotape and satellite technologies contributed to the frenetic pace of social change through the 1950s, ’60s and ’70s, simultaneously shattering and shaping modes of communication and expression. From the ’80s into the millennium, the electronic age burst into the digital age, opening entirely new terrain for creative exploration. Artists have fearlessly engaged these technological leaps, finding in them new modes of expression that continuously defy and redefine the boundaries of “art.”

“The Smithsonian American Art Museum recognizes that media art represents a sea change in the artistic landscape, and has consistently championed these artists,” said Betsy Broun, The Margaret and Terry Stent Director of the Smithsonian American Art Museum. “In the past decade the museum has put a major emphasis on building our media arts program, acquiring early examples and the finest contemporary works, hiring dedicated curators in this field and acquiring the archive of Nam June Paik. Our goal is to trace the history of the moving image in art and to showcase artists’ engagement with technology.”

“The works in this exhibition represent a rebellion against the formerly fixed boundaries of tradition, freeing artists from the confines of medium,” said Mansfield. “These artists are inventing new experiences in new media and creating new languages for our rapidly evolving world.”

The exhibition is arranged by conceptual and material groupings. Dwinell Grant’s 16 mm film “Contrathemis” (1941), a seminal exploration of color and motion, is the earliest work in the exhibition and has been recently conserved by the museum. Breder’s stop-motion animation work “Quanta” (1968) and Bucky Schwartz’s closed-circuit participatory installation “Painted Projection” (1977) touch on interrelated themes of space, perception and illusion. Schwartz’s installation has not been on public display in more than 30 years, and Breder’s sculpture “Two Cubes on a Stripped Surface” (1964) has never been displayed publically. Raphael Montañez Ortiz’s 16 mm film intervention “Golf” (1957) and Takeshi Murata’s data-moshing animation “Monster Movie” (2005) revisualize the material properties of the moving image. Bill Bierne’s “Cross Reference” (1976), a two-channel broadcast performance, and Sadie Benning’s video diaries from the 1990s explore personal relationships to technology, while Rico Gatson’s “Gunplay” (2001), a mashup of blaxploitation films and spaghetti westerns, is a hypnotic look at the connection between media, representation and Hollywood clichés.

An exciting highlight in the exhibition is the debut of two newly uncovered works by Paik, considered the “father of video art.” An early FORTRAN computer program—the existence of which was previously unknown—developed by Paik with Bell Labs, and an early rendition of one of the artist’s famed “TV Clocks” that was long thought lost, were discovered in the artist’s archive after it was acquired by the museum in 2009. The exhibition is the first time the FORTRAN program and its related print have been exhibited to the public.

Two video games—“Flower” (2007), by Jenova Chen and Kellee Santiago and “Halo 2600” (2010) by Ed Fries—represent a rapidly evolving new genre in media art. Both will be on view for the first time since the museum acquired the games in 2013. The museum is a leader in identifying video games as an art form, and it was one the first museum in the United States to acquire video games as part of its permanent collection, marking a commitment to the continuing study and preservation of video games as an artistic medium.

Included in the installation are videos drawn from the National Endowment for the Arts’ Artists Archive. This collection of more than 450 tapes was transferred to the museum from the NEA in 1997. The archive documents works by artists who received awards from the NEA’s national and regional Visual Artists Fellowship Program from 1967 to 1997. Mansfield selected Christian Marclay’s single-channel video “Record Players” (1985) and Ulysses Jenkins’ “Griot’s Triology” (1989–91) for display.

Archival materials related to the artworks on view expand on the varied and unorthodox practices among media artists. Schematic diagrams, correspondence, storyboards and other ephemera that shed light on the engineering behind custom-built electronics, broadcast performance pieces and pioneering computer programs are included in the exhibition.

“This exhibition is the first time that many of these works are being shown in dialogue with one another,” said Mansfield. “Viewed together, they give evidence to the radical ways in which artists have encountered technology and how this is transforming our thinking about art and the artistic process.”

“The Smithsonian American Art Museum is housed in what used to be the Patent Office Building, once known as ‘the temple of invention,’” said Broun. “What better space for an exhibition on the major moments in the development of media art than one built to hold the technologies of tomorrow?”

A series of free public programs will accompany the exhibition. Mansfield will lead a panel discussion on the use of technology in the artistic process with artists David Behrman, Eve Sussman and Camille Utterback Friday, April 24, at 6 p.m. in the museum’s McEvoy Auditorium. The University of Maryland’s Gamer Symphony Orchestra will present a concert featuring the music of video games Saturday, May 9, at 3 p.m. Mansfield will lead a “Media Arts 101” gallery talk in the exhibition Tuesday, May 12, at 6 p.m., and discuss the challenges and rewards of conserving and exhibiting media art with L.H. Shockey, the museum’s objects conservator, Thursday, May 14, at 6 p.m. in the museum’s McEvoy Auditorium.

“Watch This! Revelations in Media Art” is organized by the Smithsonian American Art Museum with generous support from Altria Group, The James F. Dicke Family Endowment, Margery and Edgar Masinter, Nion McEvoy and the Smithsonian Council for American Art.