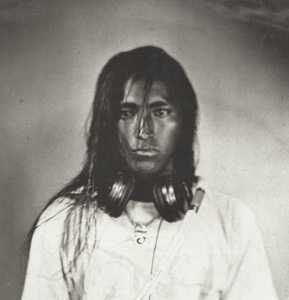 The Smithsonian’s National Museum of the American Indian in Washington, D.C., will host an exhibition of works by Native American photographers Larry McNeil and Will Wilson titled, “Indelible: The Platinum Photographs of Larry McNeil and Will Wilson.” The platinum printing process was invented in the 1870s, and platinum prints were immediately praised for their unprecedented tonal range and for being stable, permanent and indelible. By the end of the 19th century, art photographers used the platinum process to present a romantic vision of Native peoples—then understood to be a “vanishing race”—even as they struggled against disease, poverty, assimilationist policies and dispossession of tribal lands. Today, photographers McNeil and Wilson challenge this legacy by integrating the historic platinum process into their contemporary work. These artists’ works emphasize that American Indians, like the platinum print itself, have not vanished but instead remain indelible. The exhibition will be on view in the museum’s Sealaska Gallery from June 7 through Jan. 5, 2015.

Born in Juneau, Alaska, artist Larry McNeil (Tlingit/Nisga’a) is best known for his body of work, “Fly by Night Mythology.” McNeil uses the platinum process to explore the aesthetic relationship between light and dark and to deliver a critical interpretation of American Indian history.  McNeil applies the platinum process to his contemporary work to unseat long-held misconceptions of indigenous peoples and to bear witness to the devastating impact of technology, including photography itself.

Artist Will Wilson (Diné/Bilagáana) was born in San Francisco and moved to the Navajo Nation at the age of 10. Best known for his body of work, “Auto Immune Response,” Wilson uses the platinum process as a direct challenge to the art photography of the past, which still shapes popular ideas of indigenous Americans. His ongoing series, “Critical Indigenous Photographic Exchange” or CIPX (2012–present), grapples with the exploitative practices of early photographers toward Native Americans. Wilson revives the platinum process to emphasize the intersection of imagery, technology and power in the photographic representation of indigenous peoples.

Both artists will be speaking about their platinum printmaking at an international symposium on the science, conservation, significance and continued application of the historic photographic process. The “Platinum and Palladium Photographs: Technical and Aesthetic History, Chemistry and Connoisseurship” symposium will take place Oct. 22 and 23 in the museum’s Rasmuson Theater.  Registration for the two-day event is available here. This symposium is hosted by the National Museum of the American Indian with support from the National Gallery of Art and made possible with grants from the National Endowment for the Humanities, the Andrew W. Mellon Foundation and the Foundation of the American Institute for Conservation of Historic and Artist Works.