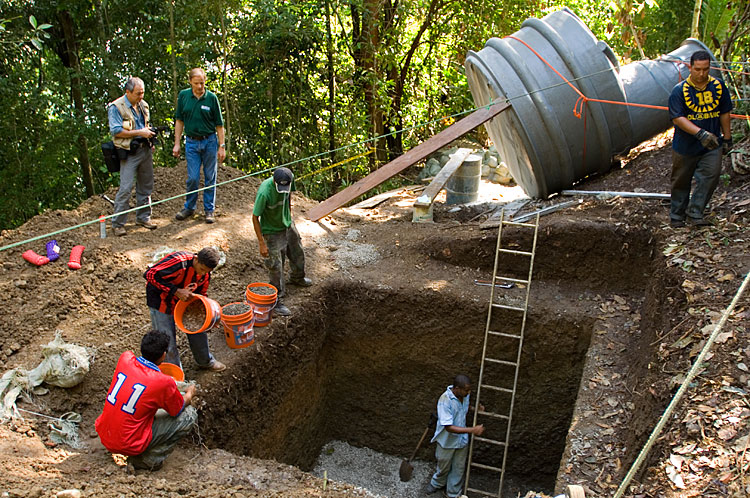 An unusual signal detected by the seismic monitoring station at the Smithsonian Tropical Research Institute’s research facility on Barro Colorado Island results from waves in Lake Gatun, the reservoir that forms the Panama Canal channel, scientists report. Understanding seismic background signals leads to improved earthquake and tsunami detection in the Caribbean region where 100 tsunamis have been reported in the past 500 years.

As part of a $37.5 million U.S. presidential initiative to improve earthquake monitoring following the devastating tsunami in the Indian Ocean in 2004, a seismic sensor was installed on Barro Colorado Island in 2006. The sensor is one of more than 150 sensors that comprise the U.S. Geological Survey’s Global Seismographic Network.

Barro Colorado Island is a hilltop that was isolated by the waters of the reservoir created when the Chagres River was dammed to form Lake Gatun, a critical part of the Panama Canal. The Barro Colorado seismic monitoring station is a collaboration between the U.S. Geological Survey, the U.S. National Oceanic and Atmospheric Administration, the University of Panama and STRI.

The sensors detect signals from many different sources that include cars, boats and machinery operating up to several kilometers away. They also pick up the background “hum of the Earth” caused by ocean waves breaking on continental shelves around the world.

Scientists noticed that sensors on Barro Colorado recorded an intriguing wave pattern at an intermediate frequency. They suspected that this pattern could be caused by standing waves in Lake Gatun. Standing waves, also known as “seiches,” are common in enclosed bodies of water like lakes and harbors where waves moving in opposite directions interact. By installing a water-level detection meter along the shoreline, researchers confirmed that changes in the water level of the lake correspond to the unusual seismic signal.

This is not the first report of seiches in Lake Gatun. Earlier reports correlated the release of methane gasses in the sediments below the canal to seiches and bottom currents in the lake. The Panama Canal Authority provided data about the depth of the Canal channel and of Lake Gatun that the authors used to model wave patterns in the lake.

Boat traffic and wind speed correlate with the unusual wave pattern, which was more common during the day than it was at night, but more information is needed to confirm what is actually causing the waves.

This report, published in the Journal of Geophysical Research, provides a new method to quantify the impact of water movements as recorded by land-based seismometers. A more exact understanding of the seismic signals resulting from water movements will improve estimates of other phenomena like tsunami impacts.

The Smithsonian Tropical Research Institute, headquartered in Panama City, Panama, is a unit of the Smithsonian Institution. The Institute furthers the understanding of tropical nature and its importance to human welfare, trains students to conduct research in the tropics and promotes conservation by increasing public awareness of the beauty and importance of tropical ecosystems. Website: www.stri.org. STRI Herbarium: www.stri.org/herbarium.