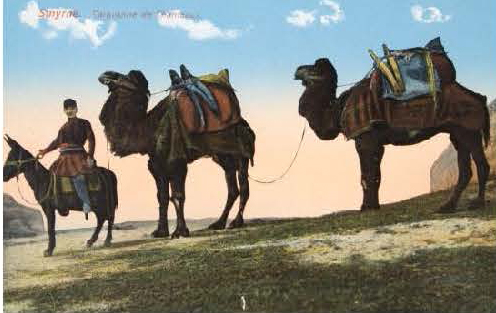 By transforming individual trips and anonymous places into iconic journeys and destinations, images depicting travel reveal and transform ideas about beauty, culture and tradition. Featuring more than 100 works created over five centuries, “The Traveler’s Eye: Scenes of Asia,” opening at the Smithsonian’s Arthur M. Sackler Gallery Nov. 22, looks beneath the surfaces of representations of travels across Asia, from expeditions for trade and research to pilgrimages and pleasure jaunts.

On view through May 29, 2015, the exhibition presents works by artists, photographers and scholars who recorded actual journeys, as well as works by artists who created imagined journeys to and across Asia. Curated by seven experts, the objects range from masterpieces of Asian art to quirky souvenirs—woodblock prints, ink paintings and art photography to archaeological drawings, vintage postcards and diaries.

“Whether they were collected as mementos, or whether they provided virtual experiences for those who remained at home, each has an extraordinary immediacy,” said Debra Diamond, organizing curator and curator of South and Southeast Asian art at the Freer Gallery of Art and Arthur M. Sackler Gallery. “Looking up at the misty peaks in a large Chinese painting of traveling merchants, one clearly sees how a master artist conveyed both the texture of daily life and awesome beauty. In contrast, Raghubir Singh’s brilliantly composed and colored photographs of his travels across India by car plunge us into a vibrant, chaotic modernity. Encountering these works invites our visitors—especially those who have traveled to the exhibition—to think about how they might record and remember their own journeys.”

“The Traveler’s Eye” begins with a magnificent pair of Edo-period Japanese namban jin (southern barbarian) screens, lushly gilded and almost 11 feet wide, showing Portuguese seafarers in a Japanese harbor beneath swirling gold clouds. It sets the stage for the subsequent galleries by revealing the deeper meaning beneath the surface of a seemingly straightforward image. Created at a time when the Japanese were grappling with an influx of European merchants and missionaries, the screens have been traditionally interpreted as scenes of cultural encounter with exotic foreigners. However, the screens are rich in visual clues that suggest that the screens were actually commissioned by wealthy Japanese merchants as symbols of good fortune.

The second gallery features five rare Chinese scrolls and paintings made between the 16th and 18th centuries. Each shows merchants traveling, via mountain paths, rivers or canals, important modes of commercial transportation in Ming and Qing Dynasty China. Within these works, the overpowering beauty of vast landscapes, rather than any specific starting point or destination is always central. At the same time, they buzz with human activity such as outdoor meals at mountain rest stops and boatmen grappling with narrow river passes. These artworks signified, to their elite viewers at home, a sense of China as peaceful and well-ordered kingdom.

Works in the third gallery focus on specific destinations, rendered with distinctive color palettes and unexpected artistic comparisons. Among the highlights in this section are Japanese woodblock prints by Hiroshige and Hokusai, which depict scenes along the famed Tōkaidō road. Connecting the two largest cities at the time, Edo and Kyoto, the Tōkaidō road with its 53 way stations served as a symbol of national unity. As travel on this route was highly restricted to individuals of great stature and wealth, such prints became an immediate sensation among the vast populace, many of whom could only imagine the journey.

Routes and rivers anchor the work of photographer Raghubir Singh (1942–1999). Singh maintained a lifelong interest in his country’s vast and vibrant landscape as a means of capturing the changing complexity of modern India. Influenced by photographers Henri Cartier-Bresson (1908–2004) and William Gedney (1932–1989), he traveled frequently to observe the ebb and flow of daily life in bustling cities, along trunk roads, and across mountains and deserts. Sublime images of the mighty Ganges River contrast sharply with saturated, dense compositions framed by India’s iconic Ambassador cars, which until their recent discontinuation were nation’s only consumer sedans.

The exhibition concludes in the fourth gallery with travel to and in Asia in the early 20th century. It first focuses on two early 20th-century Western travelers who traveled to Asia to learn about its cultural heritage: museum founder Charles Lang Freer and pioneering archaeologist Ernst Herzfeld, both of whom left their significant records to the Freer and Sackler Archives. Freer’s enthusiastically scribbled diary entries, photos and pedestal-mounted rock collection tell of a man enamored with China’s artistic glories, while Herzfeld’s exhaustive documentation of the ancient Iraqi city of Samarra show a masterful understanding of place.

The exhibition’s final installation features picture postcards from their golden age in the 1890s to 1920s. The advent of global commercial travel networks in the late 19th and early 20th centuries and the invention of photography led to an explosion in mass-produced images, particularly postcards. Serving a multitude of functions from the personal to the commercial, they were made for both tourist markets and local audiences. They eventually became so ubiquitous that they created enduring and iconic representations of Asia for global audiences, referencing the pasts and traditions of local communities.

All works are from the collections of the Arthur M. Sackler Gallery, Freer Gallery of Art and Freer and Sackler Archives.