Work Based on Life and Work of Hanns Eisler, Composer Persecuted by Nazi Germany and McCarthy-Era US
December 22, 2015
News Release 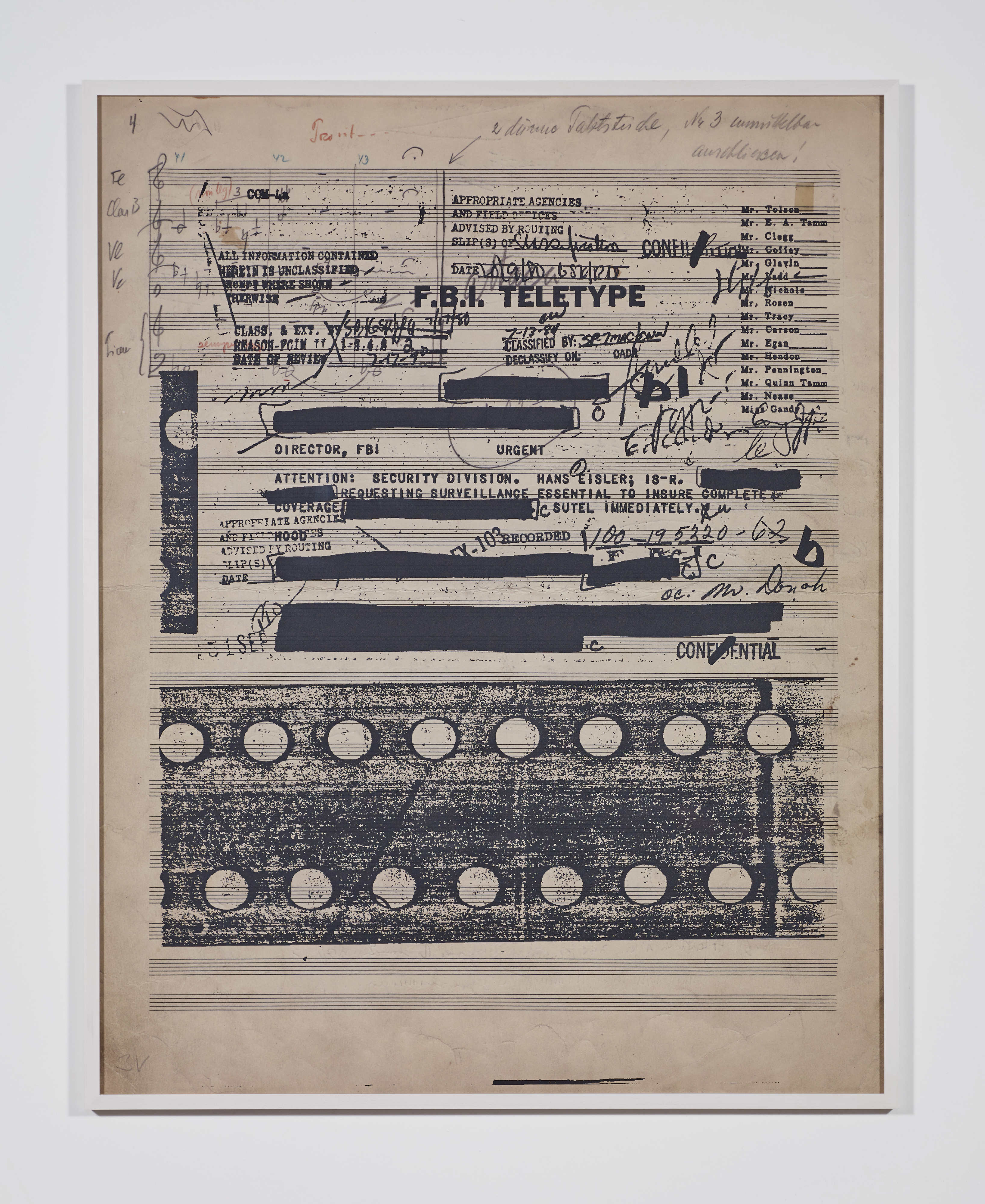 The Smithsonian’s Hirshhorn Museum and Sculpture Garden will exhibit “Part File Score” (2014), a recently acquired large-scale multimedia installation by Susan Philipsz Jan. 22–April 10, 2016. Based on the life and work of film composer Hanns Eisler, a German Jew who immigrated to the United States after his music was banned by the Nazis, only to become an early victim of the infamous Hollywood blacklist of supposed Communist sympathizers, “Part File Score” juxtaposes a 12-part sonic deconstruction of Eisler’s compositions with pages of his handwritten scores blown up and overprinted with heavily redacted pages from his FBI dossier. The installation will occupy a gallery in the ongoing exhibition “At the Hub of Things: New Views of the Collection.” Philipsz will discuss her work in a Meet the Artist talk Wednesday, March 30, 2016, at 6:30 p.m.

“Susan Philipsz is one of the leading installation artists working today,” said Hirshhorn Curator Evelyn Hankins. “Trained as a sculptor and esteemed internationally as a sound artist, she has in recent years reincorporated visual work into her practice, as in this haunting yet poignant tribute to Hanns Eisler. Located on the National Mall, the Hirshhorn is a particularly apt location for this work, with clear sight lines to those government institutions that persecuted Eisler during his time in this country. This acquisition also reflects the Hirshhorn’s continued commitment to collecting time-based media, including sound art.”

Philipsz (Scottish, b. Glasgow, 1965; lives and works in Berlin) commissioned new recordings of three Eisler scores that mark significant moments in the composer’s biography yet lack contemporaneous recordings: “Prelude in the Form of a Passacaglia” (1926), which was Eisler’s first film score, and “Fourteen Ways to Describe Rain” (1941), which he contributed to a book about film music he co-authored with Theodor Adorno, had been lost, and the completion of “Septet No. 2” (1947) had been prevented by Eisler’s deportation from the United States. For Philipsz’s versions, a violinist recorded separate tracks for each note of Eisler’s scores, which he composed using the 12-tone technique. One track features every E-flat in each piece, played in rhythm; the next contains every D, and so on, with each track played on one of 12 speakers. The music splinters and blends as viewers move through the space and examine the documents and scores.

A student of avant-garde composer Arnold Schoenberg, Eisler broke with his mentor over the inaccessibility of modernist music to mass audiences. After being labeled a “degenerate” artist by the Nazis in 1933, Eisler traveled widely before settling in the United States in 1938. He composed music for a number of films, among them Fritz Lang’s Hangmen Also Die! (1943), Douglas Sirk’s A Scandal in Paris (1946) and Harold Clurman’s Deadline at Dawn (1946). In 1947, he was ordered before the House Un-American Activities Committee and interrogated about supposed ties to the Communist Party through his brother, Gerhart. Although his case did not go to trial, Eisler and his wife were deported in March 1948, eventually settling in East Berlin.

Philipsz has had solo exhibitions at a number of major international venues, including Tate Britain and the Institute of Contemporary Arts in London; the Hamburger Bahnhof in Berlin; the Carnegie Museum of Art in Pittsburgh; the Museum of Contemporary Art in Chicago; the Wexner Center for the Arts in Columbus, Ohio; and the Museum Ludwig in Cologne, Germany. She has participated in group exhibitions such as the Istanbul Biennial, the Guangzhou Triennial, Documenta 13 in Kassel, Germany and the São Paulo Biennial. Philipsz received a Bachelor of Fine Arts in sculpture from Duncan of Jordanstone College of Art in 1993 and a Master of Fine Arts from the University of Ulster in 1994. She won the Turner Prize, awarded by the Tate to an artist under 50, in 2010.

“Part File Score” joins Philipsz’s “Sunset Song” (2003) in the Hirshhorn’s collection. A restrained and poetic exploration of gender roles in the American murder ballad “The Banks of the Ohio,” “Sunset Song” features the artist’s unaccompanied voice performing verses of the song from both male and female points of view. Philipsz also has work in the collections of the Solomon R. Guggenheim Museum in New York, the Museo Nacional Centro de Art Reina Sofia in Madrid, the Tate in London, the Museum Ludwig in Cologne, the Baltimore Museum of Art and the Walker Art Center in Minneapolis, among others. # # #