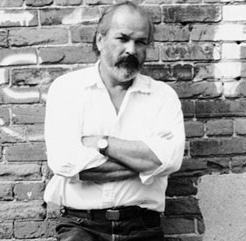 A retrospective of Carl Beam (Ojibwe, 1943-2005) that includes many of the artist’s epic works will open Saturday, Oct. 29, at the Smithsonian’s National Museum of the American Indian in New York, the George Gustav Heye Center. With 41 works, including paintings, ceramics, constructions and video, “Carl Beam” examines the artist’s investigations into the metaphysical aspects of both Western and Native cultures. The exhibition was organized by the National Gallery of Canada in Ottawa, Canada, and continues at the Heye Center through Sunday, April 15.

A vital force in contemporary Canadian art, Beam’s “The North American Iceberg” (1985) was the first work by a Native artist to be purchased by the National Gallery of Canada for its collection of contemporary art. Beam worked with expressive layering akin to the work of Robert Rauschenberg (1925-2008) rather than the traditional forms of Anishinabek “Woodland School” painters like Norval Morriseau (Anishinaabe, 1931-2008). He confounded expectations with a masterful combination of diverse iconography to comment on contemporary culture and the effects of colonialism.

“Carl Beam” opens with the artist’s early works and includes his masterpiece “The North American Iceberg.” The remaining themes of the exhibition are “The Columbus Project,” an immense body of work that re-examines European contact; “Plant Communication,” “Margins: Food/Shelter” and “The Whale of Our Being” touch on Beam’s study of people’s relationship with the environment; and “Crossroads,” a meditation on fame and celebrity. Also included are a selection of Beam’s ceramics that demonstrate the artist’s study of ancient Anasazi and Mimbres pottery from the U.S. Southwest to his later works that incorporate Japanese firing and glazing techniques.

Beam was born in 1943 in M’Chigeeng (West Bay) on Manitoulin Island in Ontario. Of Ojibwe heritage, the artist has exerted a strong influence on a whole generation of Native artists and has been instrumental in the development of the art of Canada’s First Nations. His work, executed in diverse media such as drawing, watercolor, etching, non-silver photography, photo transfer, installation and ceramics, has been exhibited throughout North America and in Italy, Denmark, Germany and China. It is found in major collections including the National Gallery of Canada, the Art Gallery of Ontario, the Vancouver Art Gallery and the Albright-Knox Gallery in Buffalo, N.Y. In 2000, Beam was inducted into the Royal Canadian Academy of Arts and, five years later, received a Governor General’s Award in Visual and Media Arts. Until his death in the summer of 2005, he lived in M’Chigeeng.