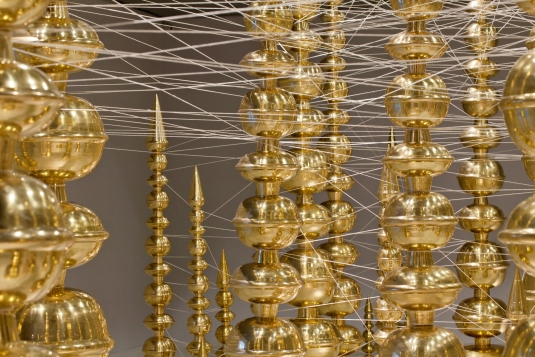 Gupta often reconfigures functional objects, such as food containers and utensils, typically found in India. For the grand installation “Terminal,” he turns to an architectural feature that dots the horizons of Indian cities. The work is composed of approximately 30 gleaming brass towers that recall the form of spires often adorned with religious symbols and installed on top of mosques, temples and churches. The towers range from 1 to 15 feet tall and are without any particular symbol designating religious affiliation. Fine threads connect each generic tower, creating an intricate and delicately balanced arrangement evocative of a dense urban landscape. A narrow path cuts through the installation, offering visitors a stunning immersive experience.

“Gupta extracts humble objects from daily life and emphasizes their symbolic potential through scale and materials,” said Carol Huh, the Freer and Sackler’s curator for contemporary art. “In ‘Terminal,’ he recontextualizes a familiar shape to encourage reflection on the idea of community, especially in a world increasingly challenged by religious differences.”

Gupta will speak about his work Sunday, Oct. 15, as part of the Freer|Sackler IlluminAsia Festival, a weekend of programs celebrating the museums’ reopening. A newly redesigned Sackler Contemporary website will provide a more in-depth look at Gupta’s work.

Gupta received his Bachelor of Fine Arts in painting from the College of Arts & Crafts in Patna, India, before moving to New Delhi, where he now lives and works. Gupta has exhibited his work in major biennials, and it has been the subject of exhibitions across Asia and Europe. Solo exhibitions were presented at the Kiran Nadar Museum in New Delhi; National Gallery of Victoria in Melbourne, Australia; Victoria & Albert Museum in London; MMK Museum für Moderne Kunst in Frankfurt, Germany; and Savannah College of Art & Design, Savanna, Ga., among others.

The Smithsonian’s Freer Gallery of Art and the adjacent Arthur M. Sackler Gallery, located on the National Mall in Washington, D.C., together comprise the nation’s museums of Asian art. It contains one of the most important collections of Asian art in the world, featuring more than 40,000 objects ranging in time from the Neolithic to the present day, with especially fine groupings of Islamic art, Chinese jades, bronzes and paintings and the art of the ancient Near East. The galleries also contain important masterworks from Japan, ancient Egypt, South and Southeast Asia and Korea, as well as the Freer’s noted collection of works by American artist James McNeill Whistler.

The Freer|Sackler is a part of the Smithsonian Institution, the world’s largest museum, education and research complex, which is dedicated to the increase and diffusion of knowledge.