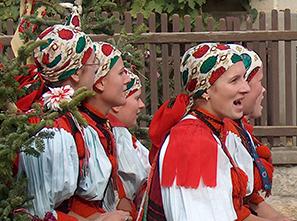 This summer, visitors to the 47th annual Smithsonian Folklife Festival will experience the vitality and living traditions that define and sustain Hungary’s unique culture. “Hungarian Heritage: Roots to Revival” will feature more than 100 participants from this 1,000-year-old country. Artists, dancers, craftspeople and cooks will share and celebrate the customs and traditions from every part of the country.

The program is produced in collaboration with the Hungarian Embassy, the Hungarian Cultural Center and the Balassi Institute, an organization that teaches Hungarian language and culture to non-Hungarians around the world. The Festival will be held Wednesday, June 26, through Sunday, June 30, and Wednesday, July 3, through Sunday, July 7, outdoors on the National Mall between Seventh and 14th streets. Admission is free. Festival hours are from 11 a.m. to 5:30 p.m. each day, with special evening events as concerts and dance parties beginning at 6 p.m. The Festival is co-sponsored by the National Park Service.

“The program is designed to highlight Hungary’s rich culture and ethnic diversity, which has resulted from its strategic location at the crossroads of Central Europe,” said program curator Jim Deutsch. “One of Hungary’s most distinctive cultural resources is the way in which many different artists, scholars and practitioners have perceived, represented and reinterpreted the country’s dynamic traditions during the past two centuries.”

There are approximately 13 million Hungarians in Central Europe—10 million in Hungary itself and another 3 million Hungarians live in other parts of the world. Festival visitors will have the opportunity to experience the rich and authentic traditions of the Magyars, the primary ethnic group of Hungary.

Visitors can meet highly skilled craftspeople from the country’s rural regions and urban communities and learn traditions that are being integrated into the daily lives of villagers and city dwellers. The program will feature activities and performances related to the dance-hall (or táncház) movement, a village dance tradition that was revitalized and brought into contemporary urban settings throughout the Hungarian diaspora. Other artisans and the tradition bearers will represent regions including Kalocsa, Karcag, and Bácska (Hungary) and Gyimes, Szék and Kalotaszeg (in Transylvania, Romania). These artisans will demonstrate traditional crafts such as candle dipping, blue dying, saddle making, mutton cooking and bridal wreath making.

The program also will feature cooking demonstrations, embroidering, hat making, furniture painting, wickerwork and oven building. The preservation of traditional handicrafts has helped boost a flourishing crafts movement in the region, and the Festival’s Marketplace will feature a selection of these works available for purchase.

At the Budapest Bistro concession, patrons can try a variety of Hungarian specialties, such as goulash soup, chicken paprikash and apple strudel. Also featured will be dishes such as chulent, shashlik and lecsó, which highlight Hungary’s Jewish, Roma, Slavic and Balkan cultures. In the adjoining bar and performance area, visitors can enjoy a selection of Hungarian wines.

The 2013 Smithsonian Folklife Festival will feature three programs. In addition to “Hungarian Heritage: Roots to Revival,” the programs are “One World, Many Voices: Endangered Languages and Cultural Heritage” and “The Will to Adorn: African American Diversity, Style, and Identity.” The Folklife Festival, inaugurated in 1967, honors people from across the United States and around the world. With approximately 1 million visitors each year, the Festival unites presenters and performers in the nation’s capital to celebrate the diversity of cultural traditions. It is produced by the Smithsonian’s Center for Folklife and Cultural Heritage.