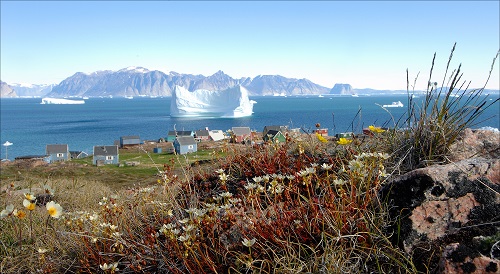 The Smithsonian’s National Museum of Natural History will host a spring festival celebrating Arctic peoples, cultures and sciences. The Arctic Spring Festival will take place May 8–10 at the museum to mark the United States’ 2015–2017 chairmanship of the Arctic Council, an international governmental body that coordinates Arctic policy.

The United States last chaired the Arctic Council from 1998 to 2000. Since then, environmental and geopolitical issues surrounding changes in the Earth’s polar ice covering have become the focus of dialogue in Arctic nations around the world. The new educational festival aims to raise awareness about the unique cultures and biodiversity that exist in the Arctic that are being threatened by climate change.

“Fifteen years ago, when the Arctic Council was founded, scientists knew that Arctic ice was melting but no one imagined an ice-free Arctic,” said William Fitzhugh, director of the Smithsonian’s Arctic Studies Center (ASC) and an anthropologist at the National Museum of Natural History specializing in circumpolar archaeology, ethnology and environmental studies. “Soon the reduction of Arctic sea ice will turn the Arctic Ocean into a global connector, and that is going to change the entire world.”

The festival is sponsored by the Smithsonian’s ASC and will feature family-friendly educational events throughout the weekend. Activities include panel discussions, science displays and interactives, animal specimens and cultural artifacts, educational games, art and photography displays, craft workshops, films from the Greenland Eyes International Film Festival, and cultural and musical performances. There will also be presentations from museum scientists, cultural experts, Arctic residents, government agencies and artists on various aspects of Arctic land, ocean, animals, cultures and peoples. For a complete list of supporting sponsors, visit here.

On Friday, May 8, from 1:30 to 4:30 p.m. the festival will open in Baird Auditorium with a panel of Arctic experts discussing new frontiers in Arctic research and education: “Why the Arctic Matters: Applying a ‘Human Perspective’ to Understanding Arctic Change.” The panel will begin with an Arctic sound installation by Charles Morrow and a musical performance by the Uummannaq Greenland Youth Ensemble followed by two films titled, “ECHOES” and “Tupilaq.” In addition, educational games, projects, presentations, crafts and opportunities to talk with scientists from the Smithsonian, and partner agencies will be available in the Sant Ocean Hall and Q?rius, The Coralyn W. Whitney Science Education Center, the museum’s education space geared toward tweens and teens.

Activities throughout the museum Saturday, May 9, from 10 a.m. to 4 p.m. will encourage visitors to learn more about the Arctic through a variety of activities, including demonstrations from Arctic nations, research agencies and organizations, and workshops, games and musical and dance performances. At 6:30 p.m., Baird Auditorium will host choreographer and dancer Jody Sperling, who will perform “Ice Cycle,” an interpretive ice dance expressing the dynamism and fragility of the Arctic icescape, based on information gathered during a 43-day Arctic research cruise. This dance performance will be introduced by traditional music and dance performed by the Uummannaq Greenland Youth Ensemble. Registration for this event is available here.

Selected Arctic-themed films from the Greenland Eyes International Film Festival will be screened Sunday, May 10, from 12 to 6 p.m. in the Q?rius Theater followed by discussions with museum anthropologist Stephen Loring and filmmaker Staffan Julén. The films will provide audiences with a greater awareness of Greenland’s global connections to climate change, oil and mineral exploration and cultural practices. Registration for this event is available here.

The Smithsonian’s National Museum of Natural History welcomed more than 7 million visitors in 2014, making it one of the most-visited museums in the world. Opened in 1910, the museum on the National Mall is dedicated to maintaining and preserving the world’s most extensive collection of natural history specimens and human artifacts. It also fosters significant scientific research and educational programs and exhibitions that present the work of its scientists to the public. The museum is open daily from 10 a.m. to 5:30 p.m. Admission is free. For more information, visit the museum on its website or connect with it on Facebook and Twitter.

About the Arctic Studies Center

Established in 1988, the ASC is the only U.S. government program with a special focus on northern cultural research and education. The center is a part of the Department of Anthropology at the National Museum of Natural History. The Smithsonian has been a leader in northern studies since the 1850s and possesses one of the world’s finest anthropological collections from Arctic and Subarctic regions. Research at the ASC seeks to bring its researchers together with community scholars in the collaborative exploration of the cultural heritage represented in the Smithsonian’s collections. The ASC operates a regional office that conducts research, outreach and exhibitions at the Anchorage Museum in Alaska. For more information, visit the ASC’s website or connect with it on Facebook and Twitter.