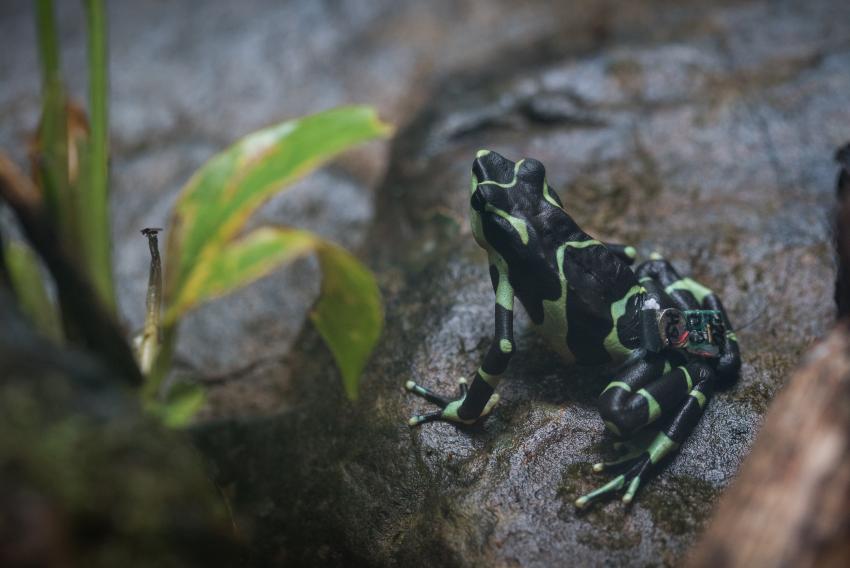 Ninety Limosa harlequin frogs (Atelopus limosus) bred in human care are braving the elements of the wild after Smithsonian scientists sent them out into the Panamanian rainforest as part of their first-ever release trial. The study, led by the Panama Amphibian Rescue and Conservation Project, aims to determine the factors that influence not only whether frogs survive the transition from human care to the wild, but whether they persist and go on to breed.

“Only by understanding the trials and tribulations of a frog’s transition from human care to the wild will we have the information we need to someday develop and implement successful reintroduction programs,” said Brian Gratwicke, international program coordinator for the rescue project and Smithsonian Conservation Biology Institute (SCBI) amphibian conservation biologist. “Although we are not sure whether any of these individual frogs will make it out there, this release trial will give us the knowledge we need to tip the balance in favor of the frogs.”

The Limosa harlequin frogs, which were released at the Mamoní Valley Preserve, have small numbered tags inserted under their skin so researchers can tell individuals apart. The scientific team also gave each frog an elastomer toe marking that glows under UV light to easily tell this cohort of frogs apart from any future releases. Smithsonian-Mason School of Conservation doctoral student Blake Klocke is currently monitoring the frogs daily at the site, collecting information about survivorship, dispersal, behavior and whether the warm micro-climate in the area provides any protection against disease.

The study is also looking at whether a “soft release” boosts the frogs’ ability to survive. Thirty of the newly released frogs spent a month at the site in cages, acclimating to their surroundings and foraging on leaf-litter invertebrates. Eight of these frogs, and eight that were released without the trial period, are wearing miniature radio transmitters that will give Klocke and the team a chance to look at differences in survival and persistence between the two groups. The researchers also collected skin-bacteria samples from the soft-release frogs to measure changes during their transition from captivity to the wild.

“The soft release study allowed us to safely expose captive-bred frogs to a more balanced and varied diet, changing environmental conditions and diverse skin bacteria that can potentially increase their survival in nature,” said Angie Estrada, doctoral student at Virginia Tech and a member of the team leading the soft release, which was funded through a Smithsonian Tropical Research Institute (STRI) grant. “It allowed us to monitor health and overall body condition of the animals without the risk of losing the frogs right away to a hungry snake.”

Limosa harlequin frogs are especially sensitive to the amphibian chytrid fungus, which has pushed frog species to the brink of extinction primarily in Central America, Australia and the western United States. The Panama Amphibian Rescue and Conservation Project brought a number of individuals into the breeding center between 2008 and 2010 as chytrid swept through their habitat. The Limosa harlequin frogs in this release trial are the first captive-bred generation of the species and only part of the rescue project’s total insurance population for the species.

“After all the work involved in collecting founder individuals, learning to breed them, raising their tadpoles, producing all their food and keeping these frogs healthy, the release trial marks a new exciting stage in this project,” said Roberto Ibáñez, in-country director of the rescue project and STRI scientist. “These captive-bred frogs will now be exposed to their world, where predators and pathogens are ever-present in their environment. Their journey will help provide the key to saving not only their own species, but Panama’s other critically endangered amphibian species.”

The Panama Amphibian Rescue and Conservation Project is a project partnership between the Cheyenne Mountain Zoo, the Houston Zoo, Zoo New England, the SCBI and STRI.

SCBI plays a leading role in the Smithsonian’s global efforts to save species from extinction and train future generations of conservationists. SCBI spearheads research programs at its headquarters in Front Royal, Va., the Smithsonian’s National Zoo in Washington, D.C., and at field research stations and training sites worldwide. SCBI scientists tackle some of today’s most complex conservation challenges by applying and sharing what they learn about animal behavior and reproduction, ecology, genetics, migration and conservation sustainability.