Smithsonian Scientists Find That for Every Mammal Species, the Rainforest Holds 300 Arthropod Species 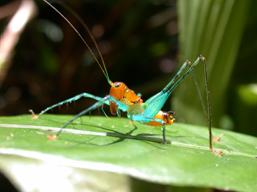 A new study from the rainforests of Panama provides an unprecedented level of detail regarding the diversity and distribution of arthropod species from the soil to the forest canopy. Yves Basset, scientific coordinator of the Center for Tropical Forest Science’s Arthropod Initiative at the Smithsonian Tropical Research Institute, led an international team to sample, sort, catalog and estimate that a 23-square-mile forest reserve hosts a total of around 25,000 arthropod species—a figure vastly outnumbering that of better-studied organisms. The study is published online in the Dec. 13 issue of the journal Science.

Most multicellular species on Earth are arthropods (invertebrate animals with exoskeletons, such as insects, spiders and mites) living in tropical forests. Yet, given the difficulties involved in tallying them, little is known about their exact numbers—even at the scale of a single forest. The study, called Project IBISCA-Panama, brought together 102 researchers from 21 countries to collect and identify arthropods from all parts of the San Lorenzo forest reserve near the Atlantic entrance to the Panama Canal. During 2003-2004, the field team spent nearly 70 person- or trap-years sampling the rainforest canopy from a gondola suspended from a construction crane, on inflatable platforms, from hot-air balloons, dangling from climbing ropes and crawling along the forest floor to sift soil and trap and bait arthropods. During the ensuing eight years, the team sorted and identified 130,000 arthropods, which totaled more than 6,000 species.

Based on the estimates of species diversity obtained from 12 intensively sampled smaller sites within the forest, the team calculated that the entire rainforest reserve harbors in excess of 25,000 arthropod species. “This number implies that for every species of vascular plant, bird or mammal in this forest, you will find 20, 83 and 312 species of arthropods, respectively,” said Basset.

“If we are interested in conserving the diversity of life on Earth, we should start thinking about how best to conserve arthropods,” said Tomas Roslin from the University of Helsinki, one of 35 co-authors.

What surprised researchers the most was that more than half of all species could be found in a single hectare of the forest, indicating that to determine the species diversity of a tropical rainforest, it may not be necessary to sample gigantic areas. A one hectare area may suffice to get an idea of regional arthropod richness—provided that this total includes widely spaced plots representative of variation within the forest.