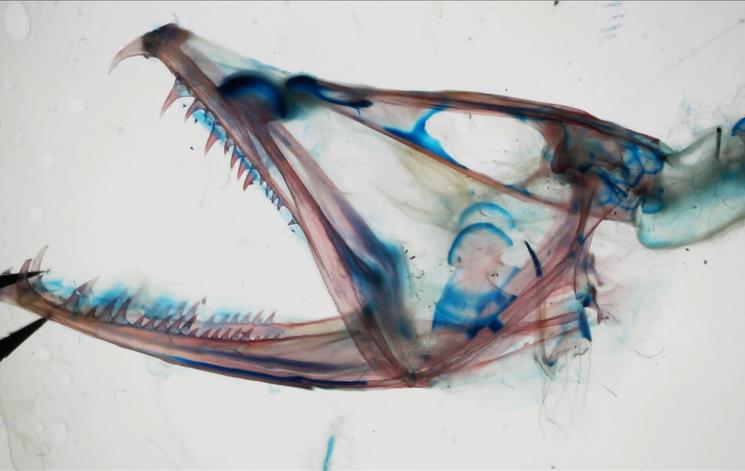 Scientists with the Smithsonian’s National Museum of Natural History and the French Muséum national d’Histoire naturelle are the first to describe and illustrate an evolutionary novelty among fishes—a unique, flexible connection between the skull and vertebral column in barbeled dragonfishes, a group of closely related deep-sea predatory fishes. The description details the first and only example of a complex, flexible head joint among fishes known to science.

The description and illustrations, reported Feb. 1 in the journal PLOS ONE, present a detailed analysis of the functional head joint and includes a number of striking images and figures to show the unique anatomy of these fishes.

“The arsenal of specialized traits that barbeled dragonfishes have evolved as deep-sea predators—huge mouths with dagger-like teeth, distensible stomachs, snake like, black bodies with light producing organs and elaborate chin barbels with bioluminescent tissue—make them ferocious and voracious ambush predators, thus the name dragonfishes,” said Smithsonian scientist Dave Johnson. “We suspect that the head joint adaptation helps these fishes engulf their prey items, since the added flexibility allows them to open their mouths up to 120 degrees wide—an angle that is unmatched in any other group of fishes.”

Scientists studied barbeled dragonfish specimens from the collections of the National Museum of Natural History and five other natural history collections around the world. Barbeled dragonfishes are a dominant group of predatory fishes that live mainly between 650 to 3,300 feet deep in the ocean’s mesopelagic zone, otherwise known as the twilight zone, so museum collections provide an invaluable resource for scientists seeking to access and study these otherwise difficult-to-reach deep-sea fishes.