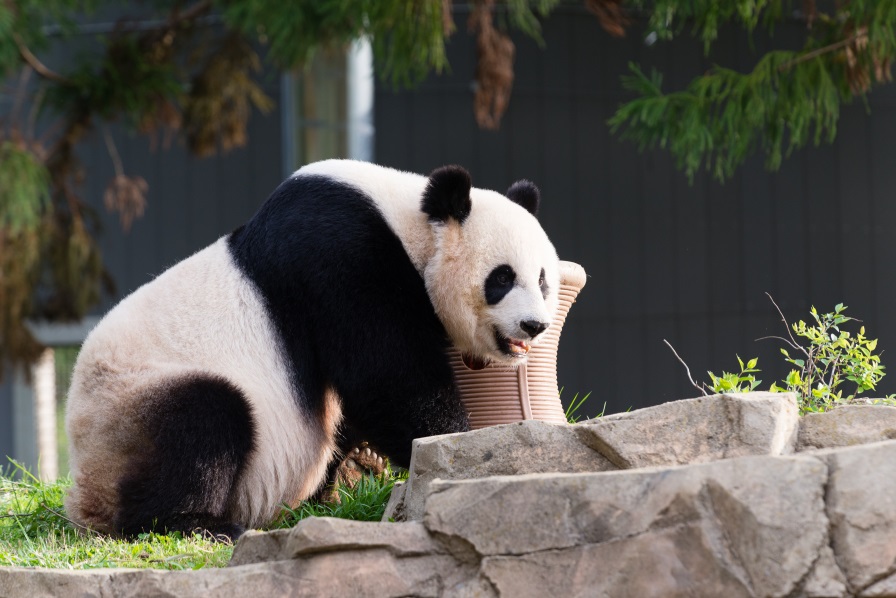 After carefully monitoring the behavior of both its giant pandas and female Mei Xiang’s (may-SHONG) hormones for weeks, the National Zoo and Conservation Biology Institute’s team of reproductive scientists, veterinarians and panda keepers performed two artificial inseminations within the past 24 hours. The first procedure started at 6 p.m. April 26, and the second began at 7:30 a.m. this morning, April 27. Daily hormone reports showed Mei Xiang’s estrogen levels peaked Sunday morning, an indication that she was in estrus and able to become pregnant.

For the first time this year, scientists used semen collected from a giant panda living at the China Conservation and Research Center for the Giant Panda in Wolong, China. The chosen male panda, Hui Hui (h-WEI h-WEI), was determined to be one of the best genetic matches for Mei Xiang.

Although the Zoo’s male panda Tian Tian (t-YEN t-YEN) is not as genetically valuable as Mei Xiang, he is still important to the panda population. Scientists also used high-quality fresh semen collected from Tian Tian for the artificial inseminations. The first procedure used a combination of sperm from Hui Hui and Tian Tian. The second procedure also used thawed sperm from Hui Hui and sperm refrigerated overnight from Tian Tian. If Mei Xiang gives birth, scientists will use a DNA test to determine which male sired the cub.

Mei Xiang was put under general anesthesia for the non-surgical artificial insemination(s). Each procedure took about an hour. The Zoo live-streamed portions of the first procedure on Twitter using Periscope and live-posted to Instagram using #PandaStory.

Jon Ballou, a research scientist with the Smithsonian Conservation Biology Institute (SCBI), made the breeding recommendation. He makes the breeding recommendations for all eligible giant pandas living in human care. The sample from Hui Hui was frozen and flown from China to SCBI’s cryopreservation bank at the National Zoo. The Zoo chronicled the journey on Instagram using #PandaStory.

Mei Xiang is genetically valuable and has two surviving offspring, both the results of artificial inseminations. Tai Shan (tie-SHON) and Bao Bao (BOW-BOW) were both sired by Tian Tian, whose genes are well represented in the giant panda population living in human care because his father was a very successful breeder. Hui Hui has not yet sired any cubs. A cub produced by Mei Xiang and Hui Hui would be very genetically valuable helping to preserve the genetic diversity of the panda population in human care.

The Zoo received approval for its breeding plans from the China Wildlife and Conservation Association and the U.S. Fish and Wildlife Service, which monitors giant panda research programs in the United States.