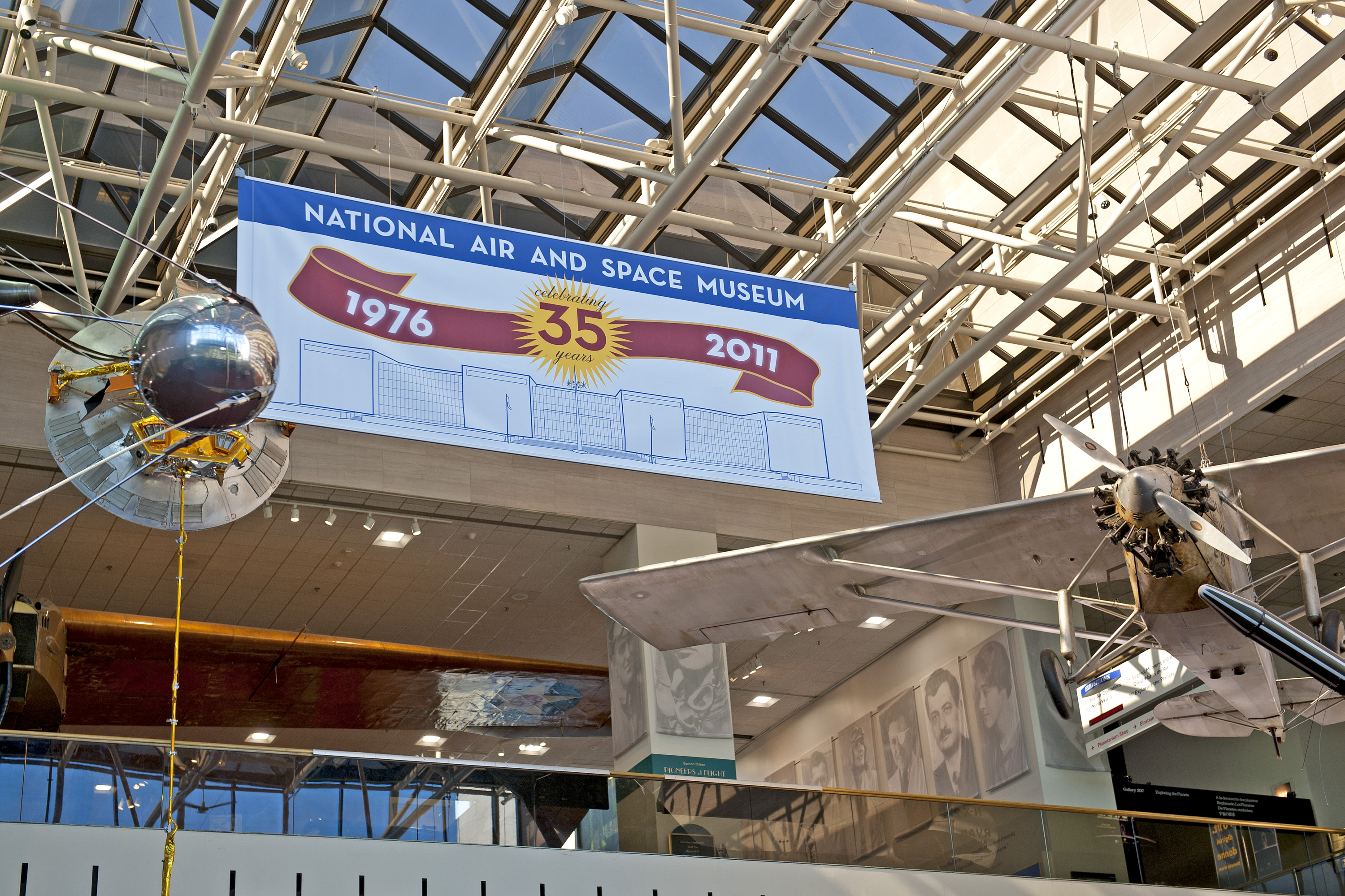 July 1, 1976, 35 years ago Friday, as a highlight of the American bicentennial, the National Air and Space Museum welcomed the first visitors to its new building on the National Mall in Washington. Home to such icons of flight as the 1903 Wright Flyer, the Spirit of St. Louis, Friendship 7 and the Apollo 11 command module—it quickly became the most popular museum in the world. As of May, the museum has welcomed 303,674,128 million visitors to its two buildings. In 2003, the Air and Space Museum expanded to Northern Virginia with the Steven F. Udvar-Hazy Center, now the most popular museum site in the commonwealth.

The museum will celebrate its 35th anniversary at the flagship building in Washington Friday, July 1. The popular Imax movie that premiered on opening day, To Fly! will be showing at 1976 prices: 50 cents for adults and 25 cents for children. At 2 p.m., curators Michael Neufeld and Alex Spencer will discuss their book, Smithsonian National Air and Space Museum: An Autobiography, which tells the story of the museum and its historic collection from its earliest days to the present, followed by a book signing.

To recognize the anniversary, the museum has created the website “Celebrating 35 Years of Memories at the National Air and Space Museum.” The site includes congratulatory messages from well-wishers, from Michael Collins, the Apollo 11 astronaut and first director of the museum, to Elmo of Sesame Street fame. Members of the public can post their own memories of the museum.

The museum was first envisioned when the National Air Museum was created as a separate bureau of the Smithsonian. Public Law 722 was signed by President Harry S. Truman in 1946. Previously, the Smithsonian’s aeronautics collection had been part of the Smithsonian’s Department of Arts and Industries, but the collection had grown rapidly with World War II aircraft, and it was decided that the brief but imposing history of aviation warranted a separate museum. Twenty years later, as Americans raced the Soviets to reach the moon, President Lyndon B. Johnson signed the National Air Museum Amendment Act, which added “space” to the museum’s name and also authorized the construction of a much-needed museum building. Ten years later, the museum opened as President Gerald R. Ford declared it “a perfect birthday present” to the nation.

With a dual commitment to history and science, the museum conducts research in three areas: aeronautics, space history and planetary studies. The museum maintains the world’s largest collection of historic aircraft, spacecraft, other flight-related artifacts, works of art and archival materials. There are 22 exhibition galleries in the flagship building and two exhibition hangars—the Boeing Aviation Hangar and the James S. McDonnell Space Hangar—at the Udvar-Hazy Center. The center’s Mary Baker Engen Restoration Hangar is expected to be operational by the end of 2011.