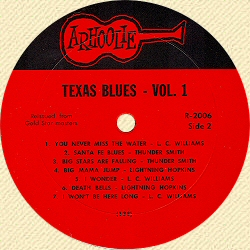 The collection features seminal recordings by artists such as Bukka White, Big Mama Thornton, Lightnin’ Hopkins, Mance Lipscomb, Mississippi Fred McDowell, Big Joe Williams, Flaco Jiménez and Clifton Chenier. Recent releases include those by the Savoy Family Band, the Magnolia Sisters and the Pine Leaf Boys. Hear Me Howling, a collection of recordings made in the San Francisco Bay area in the 1960s, won a Grammy award in 2011, and the same year the label issued a Grammy-nominated retrospective box set celebrating Arhoolie’s 50th anniversary.

“The Arhoolie Records collection is a national treasure of recorded music,” said Daniel Sheehy, curator and director of Smithsonian Folkways Recordings. “We are honored to further the accessibility of these recordings and continue the commitment Chris Strachwitz has had to finding, recording and promoting ‘down home’ music since he founded Arhoolie in 1960.”

All Arhoolie albums will be available on CD and digital formats, along with selected LPs, at folkways.si.edu shortly. The Down Home Music record store and the Arhoolie Foundation will continue to operate separately from Smithsonian Folkways.

About the Center for Folklife and Cultural Heritage

Rooted in principles of cultural democracy and social equality, the Smithsonian’s Center for Folklife and Cultural Heritage supports the understanding and sustainability of cultural heritage and diversity in communities across the United States and around the world. The Center produces the annual Smithsonian Folklife Festival and Smithsonian Folkways Recordings, maintains and makes accessible the Ralph Rinzler Folklife Archives and Collections, produces extensive research and educational materials and promotes cultural heritage policy for the benefit of communities around the world. For more information, visit folklife.si.edu.