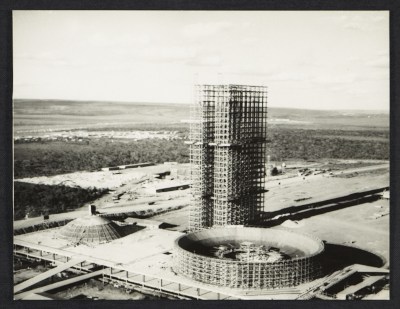 “SPANS: Photographs from the Esther McCoy Papers at the Archives of American Art” is a site-specific exhibition and installation by artist Terence Gower. Gower’s innovative project is the first in a series of artist interpretations of materials at the Archives. “SPANS” will be on display from March 9 to June 5 in the Lawrence A. Fleischman Gallery at the Smithsonian’s Donald W. Reynolds Center for American Art and Portraiture.

Gower seamlessly weaves together his selection of archival photographs and his drawing, executed in adhesive vinyl, on the vaulted ceiling of the gallery into an installation in dialogue with Norman Foster’s glass canopy over the Robert and Arlene Kogod Courtyard (visible through the windows of the gallery). The photographs are from the papers of Esther McCoy, a Los Angeles-based architecture critic and historian active from the 1950s through the 1970s and include images of architectural spans such as Félix Candela’s shell forms in his Mexico City Stock Exchange (under construction, 1953); Frei Otto’s German Pavilion at the Expo 67, in Montreal; and Buckminster Fuller’s Geodesic Dome at the Milan Triennale (1957). Gower’s interest in these images is both technical and aesthetic. He wrote, “I was captivated by the exquisite patterns and undulating volumes produced by advanced engineering. Architectural photography is the ideal medium to express these beautiful forms, and these superb prints are but a few of the hundreds of images McCoy obtained for her writing projects, and later gave to the Archives.”