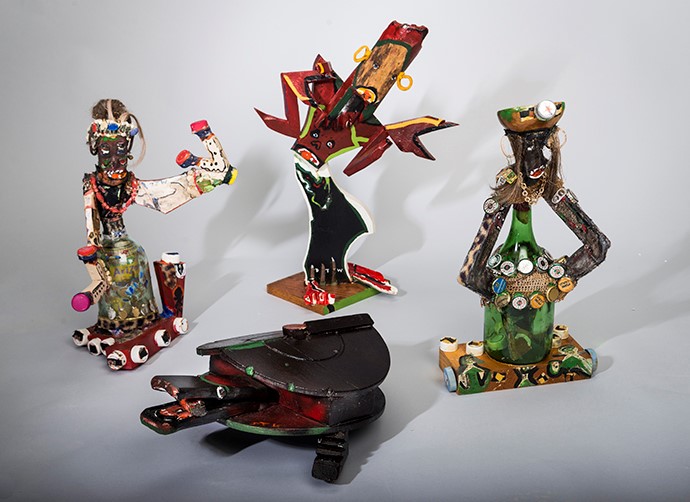 Derek Webster (1934–2009) took the notion of doing yardwork at his Chicago home to a high level. Webster so adorned his yard with fanciful sculptures he created from found objects that in 1980, a gallery owner who was among the passersby admiring the work, set about to introduce the art to a larger audience. The artwork of this celebrated self-taught Honduran artist is the focus of the new exhibition, “The Backyard of Derek Webster’s Imagination,” on view at the Smithsonian’s Anacostia Community Museum through April 23, 2017.

“In Webster’s work, we see how an individual who migrated here combined traditions, memories, aesthetics and encounters from the homeland and journeys along the way with those of his adopted country to create something new, self-affirming and enriching to the community—a classic American story,” said Lori Yarrish, acting director of the museum. “As the museum moves into our 50th anniversary next year and beyond, we will highlight selections from our permanent collection that exemplify the strength of urban communities.”

The exhibition showcases nine pieces of Webster’s work from the museum’s Regenia A. Perry Folk Art Collection acquired in 2007.

Webster did not make art until he was in his mid-40s. Born in Honduras and raised in the Belize (then British Honduras), he worked on banana boats and tankers sailing to ports such as Haiti, Cuba, Portugal, Liberia and the United States. In 1978, he settled in his Chicago South Side home where, captivated with his new garden, he planted vegetables, built decorative fencing and began creating sculptures using materials he found around the neighborhood and while on his job as a hospital janitor. As his work gained acclaim, it made its way into galleries, private collections and a major exhibition at the Dallas Museum of Art.

Guest curator Nada Alaradi noted that Webster’s work evolved from “amorphous forms with abstract faces and arms raised high” to later figures shaped to look more like animals and people and both types are featured the exhibition.

“What is fascinating about Derek Webster’s work is the playfulness and exuberance he placed in each pieces,” Alaradi said. “His use of bright colors, multiple faces and humor shines through, conveying how much he was an artist that was truly enjoying his practice.”

Involved in the museum’s emerging curator’s initiative, Bahrain born and raised Alaradi recently graduated from the Maryland Institute College of Art with a Master of Fine Arts in curatorial practice under a Fulbright Scholarship.

Webster described his work as idea driven and inspired by his memories but ever modest, still felt they were “just another part of yardwork.” A video interview of the artist is also part of the display.

Included in the Webster exhibition is a presentation of 40 pieces created by local children and youth who were inspired by his artistry. The participating youth are from Capital City Public Charter School, Project Create and Children’s Health Center-Anacostia.

The Webster exhibition will complement the upcoming exhibition “Gateways/Portales” opening Dec. 5 in the main gallery.