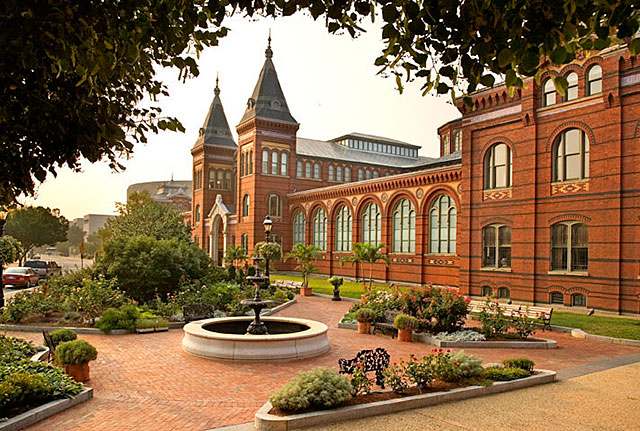 The Smithsonian and the U.S. Patent and Trademark Office have begun a seven-year collaboration to develop programs and exhibitions related to innovation for the Arts and Industries Building located on the National Mall between the Castle and the Hirshhorn Museum. The building is scheduled to reopen in summer 2014.

The collaboration will begin this year with an Innovation Expo June 20-22 at the Patent and Trademark Office’s headquarters in Alexandria, Va., where the latest technological developments—patented technologies from American companies—will be showcased. The three-day expo will feature a narrative about how the U.S. patent system promotes innovation and technological development. The Innovation Expo, which will be organized in partnership with the Smithsonian, will serve as a template for future expos to be held in the Innovation Pavilion at the A&I Building (the Pavilion will cover around 18,000 square feet of the 40,000 square feet of public space in the building).

During 2013, the Smithsonian will also develop further designs for the new Innovation Pavilion and begin work on plans for exhibitions and programming. The Pavilion will be a center for active learning, engaging visitors using digital technology and informing them about new developments in American innovation and technology. The collaboration is described in a Memorandum of Agreement signed by the Smithsonian Secretary and the director of the U.S. Patent and Trademark Office. The USPTO anticipates supporting the Pavilion over the term of the collaboration.

“The Arts and Industries Building has always been about celebrating innovation and progress, and it has been one of my goals to reopen the building and return it to that purpose,” said Wayne Clough, Smithsonian Secretary. “Through this collaboration with the United States Patent and Trademark Office, we will create a program that not only celebrates American ingenuity, but also reflects the 21st century expectations of our visitors.”

“We look forward to working with the Smithsonian to showcase America’s rich history and bright future of innovation, providing a workshop where inventors of all ages can interact together,” said Under Secretary of Commerce for Intellectual Property and Director of the USPTO David Kappos.

The Smithsonian and the USPTO have worked together on several projects in recent years, including three exhibitions: “The Great American Hall of Wonders” and “To Build a Better Mousetrap” at the Smithsonian American Art Museum, and an exhibition about Apple Inc. founder Steve Jobs’ patents in the Smithsonian’s Ripley Center.

The A&I Building, which opened in 1881 as the U.S. National Museum, closed in January 2004 to undergo a structural review and extensive renovation. The current work on the building includes installation of more than 800 new custom windows that re-create the appearance of the original ones, reinforcement and replacement of some original iron trusses with steel, repair of the brick facade and replacement of the 2.5-acre roof. This phase of renovation, paid for with federal funds, is scheduled to be completed by later this fall.

When A&I opens in summer 2014, visitors will notice that the soaring spaces, once divided by floors and partitions, have been reopened; some of the original painting and plaster have been uncovered; and the windows, no longer tinted white, offer views of the Mall and gardens around the building. The restoration will allow daylight throughout the building, reducing the need for artificial light. Visitors to the A&I Building will feel the same sense of wonder the first visitors experienced when the Adolf Cluss-designed building opened to the public in 1881.

A&I’s first major exhibition featured objects from the 1876 Centennial Exposition in Philadelphia. The building was restored to its Victorian appearance for the 1976 U.S. Bicentennial celebration, when it housed a recreation of the first centennial exposition. After the Bicentennial exhibition, the A&I Building evolved to become a showcase for temporary, and sometimes experimental, exhibitions from Smithsonian museums and other organizations.

The interior space will not be completely finished in 2014 because the permanent use of the building is uncertain. Plans for A&I between 2014 and 2021 are considered temporary as the Smithsonian awaits final disposition of the proposed National Museum of the American Latino, whose commission has recommended A&I as a possible location of the new museum.

The U.S. Department of Commerce’s United States Patent and Trademark Office is the federal agency with responsibility for granting U.S. patents and registering trademarks. In doing this, the USPTO fulfills the mandate of Article I, section 8, clause 8 of the Constitution that the executive branch “promote the progress of science and the useful arts by securing for limited times to inventors the exclusive right to their respective discoveries.”