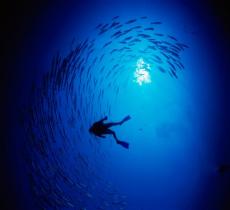 The Smithsonian announced today that it will launch a major long-term project to study coastal marine biodiversity and ecosystems around the globe. The project is made possible by a $10 million donation from Suzanne and Michael Tennenbaum, senior managing partner of Los Angeles-based Tennenbaum Capital Partners and philanthropist. The goal of the project—Smithsonian’s Tennenbaum Marine Observatories—is to monitor the ocean’s coastal ecosystems over a long period of time.

The Tennenbaum Marine Observatories will be the first worldwide network of coastal ecological field sites, standardizing measurements of biological change. By studying sites with Smithsonian experts in biology, ecology and anthropology, and using technologies like DNA sequencing, the project will provide an unprecedented understanding of how marine biodiversity is affected by local human activities and global change, such as ocean warming, acidification and rising sea levels.

“As our coasts undergo accelerating change due to human activity and the effects of climate change, it is more important than ever to monitor and understand the ocean’s biodiversity,” said Smithsonian Secretary Wayne Clough. “We are grateful to Michael and Suzanne for this donation, which allows the Smithsonian to focus its unique expertise and strength in long-term research.”

The project will have five field sites: the Smithsonian Environmental Research Center in Edgewater, Md., on the Chesapeake Bay, the Institution’s marine station at Fort Pierce, Fla., Carrie Bow Cay in Belize and the Smithsonian Tropical Research Institute’s two locations in Panama—Bocas Del Toro on the Caribbean and Naos station on the Pacific. As the project grows, the Smithsonian will establish additional research sites with collaborators around the globe to monitor coastal ocean health, with the goal of at least 10 new sites within the next decade.

As part of the project, scientists will create plots at each site where the diversity and abundance of marine organisms will be recorded on a regular basis. These measurements will be complemented by other standardized observations and experiments. By studying each site using the same methods over a long period of time, scientists will be able to build a comparative database. The data will allow scientists—for the first time—to comprehensively study environmental change around the world’s coasts.

“For most of my life, I have lived near the water,” said Michael Tennenbaum. “I was—for a short while—a lifeguard and a swimming instructor. For 25 years, I have loved scuba diving and have dived all over the world. I feel most at home when floating underwater.

“I believe that the Smithsonian has the best chance to do this job. It’s one of the largest research organizations in the world and already does similar research. And the Smithsonian has identified this area as a key focus going forward. Its leader, my good friend Wayne Clough, feels passionately about creating a global marine observatory. This is such a huge task, passion will be needed.”

The ocean covers 70 percent of the planet’s surface and plays a key role in the global ecosystem. Nearly two-thirds of the world’s population lives within 100 miles of a coastline, yet there is no long-term data on the ocean.

By documenting changes in marine biodiversity and coastal ecosystems, the Tennenbaum Marine Observatories project will position the Smithsonian to provide the long-term data and understanding that are critical to address current and future challenges to sustaining a healthy ocean.

The Tennenbaum Marine Observatories initiative is based on a similar above-water project—the Smithsonian Institution Global Earth Observatories (known as SIGEO)—that includes 47 land plots around the globe where scientists have been monitoring and comparing dynamics of forested habitats for 35 years. Due to its success, the Smithsonian is using it as the model to look at the marine realm now.

“For years I have watched how standardized observations made around the globe have transformed our understanding of how tropical forests work,” said Nancy Knowlton, the Sant Chair for Marine Science at the Smithsonian’s National Museum of Natural History. “We will now be able to do the same thing for the ocean, with this MarineGEO, taking advantage of the latest technologies that allow us to keep track of everything from microbes to whales.”

The Smithsonian is uniquely qualified to conduct such an ambitious marine project because of its wide range of expertise and collections.

The Smithsonian has developed clear goals for the Tennenbaum Marine Observatories. The donation will provide funding for the establishment of research sites and the beginnings of the coastal marine database. The information that scientists gather will continually provide a greater understanding of how coastal ecosystems function, which in turn can help improve how these areas are used and managed.

Tennenbaum is senior managing partner and founder of Tennenbaum Capital Partners LLC, which manages funds with assets of about $5 billion. Previously, Tennenbaum was a Wall Street executive where he managed various departments of a major investment bank. He has served on the boards of a number of public and private companies, including the Smithsonian National Board.