Museums, Explorers and Archaeologists in Pursuit of the Past
August 1, 2011
News Release 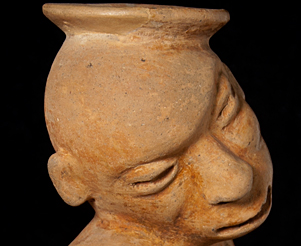 The Smithsonian Latino Center will host a symposium Aug. 4 – 5 at the National Museum of the American Indian as part of its Central American Ceramics Research Project. The symposium will begin Aug. 4 at 7 p.m. with a keynote presentation by John Hoopes from the University of Kansas and continue with lectures by experts, scholars and researchers Aug. 5 beginning at 10:30 a.m. The symposium is free and open to the public.

This symposium is part of the Latino Center’s Central American Ceramics Research Project, which is an initiative to assess and study the National Museum of the American Indian’s 12,000-piece Central American archaeological ceramics collection. It has been determined that many museums and private collections are in possession of countless numbers of ceramic, stone, gold and jade objects created by the ancient peoples of Central America. Scholarly interest in this region, however, did not begin until the late 19th and early 20th centuries. This symposium delves into this history by looking at both early antiquarians and recent scholarly approaches to collecting and understanding the past. It focuses on individuals, institutions and the social and political factors that have affected collecting of objects from Belize and Guatemala to the north down to Panama in the south.