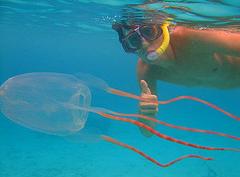 Scientists from the Smithsonian’s National Museum of Natural History identified a new species in 2011: the Bonaire banded box jellyfish. Arizona State University’s International Institute for Species Exploration included the Bonaire banded box jellyfish in their 2011 Top Ten New Species list. The official scientific name, Tamoya ohboya, was submitted by Lisa Peck, a high school marine biology teacher and part of a citizen science project organized by the Coalition on the Public Understanding of Science. She chose the name due to the tendency of those who encountered it to exclaim, “Oh boy!”

Tamoya ohboya is a member of the Box Jelly class (Cubozoa), so named because their bodies are box-shaped rather than the bell-shape typical of most other jellyfish. Out of more than 1,000 known species of jellyfish, the box jellies make up a small group of around 50. They are special because unlike other jellyfish they have complex eyes that are capable of vision, which enhances their ability to swim around obstacles and predators, and even may aid in mating in some species. Box jellyfish are notoriously dangerous and T. ohboya is no exception. It is highly venomous and since 1989, approximately 50 sightings of this creature have been confirmed and three incidents reported of stings, one of which required hospitalization.

Discovered off the coast of the island of Bonaire in the Dutch Caribbean, T. ohboya is identified by distinct reddish-orange color bands on its tentacles and a body densely covered with warts. Venom-injecting stinging capsules are found in the warts and in the tentacles, which cause serious pain. They use their venomous stinging capsules to paralyze their prey, which commonly consists of small crustaceans and fish.

“I am really gratified by this honor because the entire point of having this species named by the public (an idea my wife came up with) was to bring extra attention to biodiversity science, how we name and describe life on the planet,” said Allen Collins, curator of Invertebrate Zoology at the National Museum of Natural History and biologist at the National Oceanic and Atmospheric Administration. “People are so enthused by discovery, and our hope is that the process of documenting biodiversity, and its importance, becomes better known.”

The Top Ten New Species list was created to raise awareness to the biodiversity crisis affecting the planet. Without the work of experts, explorers and museums to catalog the species that exist on Earth now, humans are powerless to understand potentially dangerous changes in the ecosystem due to the loss of biodiversity. The more species discovered, the better scientists can understand the complexity of the biosphere and therefore be better prepared to preserve and protect millions of species from environmental challenges that lie ahead. Another focus is biomimetics, a field of study turning to the natural world for clues as to which sustainable processes can be used to outfit humans for continued survival.

This is the fifth year of the list, which is announced in conjunction with the anniversary of the birth of Carolus Linneaus, the Swedish botanist who created the system scientists still use today for naming, describing and classifying species. The jelly joins the esteemed ranks along with the likes of a sneezing monkey, an underworld worm, a fungus named after SpongeBob SquarePants, an orchid that only blooms at night, an ancient walking cactus creature, a tiny wasp, a vibrant poppy, a giant millipede and a blue tarantula. More than 200 nominations were submitted through ASU’s website and via institute staff and committee members, out of more than 18,000 species described during 2011. The committee members represent a wide variety of places and backgrounds and had complete autonomy to design their own criteria for those who made the list. The top ten represented species from Brazil, Myanmar, the Dutch Caribbean, South Africa, Papua New Guinea, Spain, Borneo, Nepal, China and Tanzania.

The Smithsonian’s National Museum of Natural History is located at 10th Street and Constitution Avenue N.W. in Washington, D.C. The museum is open daily from 10 a.m. to 5:30 p.m., with extended hours during the summer (until 7:30 p.m.). Admission is free. More information about the exhibition and the museum is available at www.mnh.si.edu, by calling (202) 633-1000 or through the museum’s social networks, Facebook, Twitter, YouTube, Flickr and Pinterest.