Smithsonian Explores the History of Fourth of July Food

Where Did Hot Dogs, Hamburgers Come From?
July 2, 2013
News Release 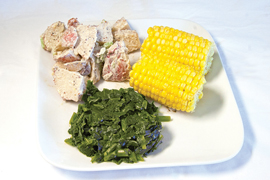 Independence Day is the perfect opportunity to fire up the grill, listen to some good old American music and enjoy a chest-thumping fireworks display. July Fourth celebrates the birth of the United States of America and honors the history that created a melting pot of different ethnicities and cultures. No Independence Day celebration would be complete without a picnic table filled with some traditional favorites: hamburgers, hotdogs, buns, kabobs, potato salad, ketchup and watermelon. But where did these July Fourth foods come from? Bruce Smith and Melinda Zeder, archaeologists at the Smithsonian’s National Museum of Natural History, explain where and how it all began.

Wheat was domesticated about 10,000 years ago in the Near East and spread to Europe about 5,000 years later. It came to the Americas on Christopher Columbus’ ships in 1492–1493. It quickly grew in settlements in the 1500s and 1600s. Tomatoes, native to northern South America, were brought to Europe in the 1500s and returned to the Americas by European colonists. Like tomatoes, potatoes were domesticated in South America 8,000 years ago. By 1781, Thomas Jefferson was serving tomatoes and French-fried potatoes at his dinner table. They were brought to Europe in the 1600s and arrived in North America around 1800 with European settlers. Watermelon was brought to the Americas by the Spanish around 1600 from central and southern Africa. It was quickly adopted by the Cherokee, Choctaw and other American Indian tribes.

For information on other popular American foods and cookware, visit the Smithsonian’s National Museum of American History exhibit, FOOD: Transforming the American Table, 1950-2000.

Founded in 1846, the Smithsonian is the world’s largest museum and research complex, consisting of 19 museums and galleries, the National Zoological Park, nine research facilities and 20 libraries. There are 6,000 Smithsonian employees and 6,500 volunteers. Approximately 30 million people from around the world visited the Smithsonian in 2012. The total number of objects, works of art and specimens at the Smithsonian is estimated at 137 million.