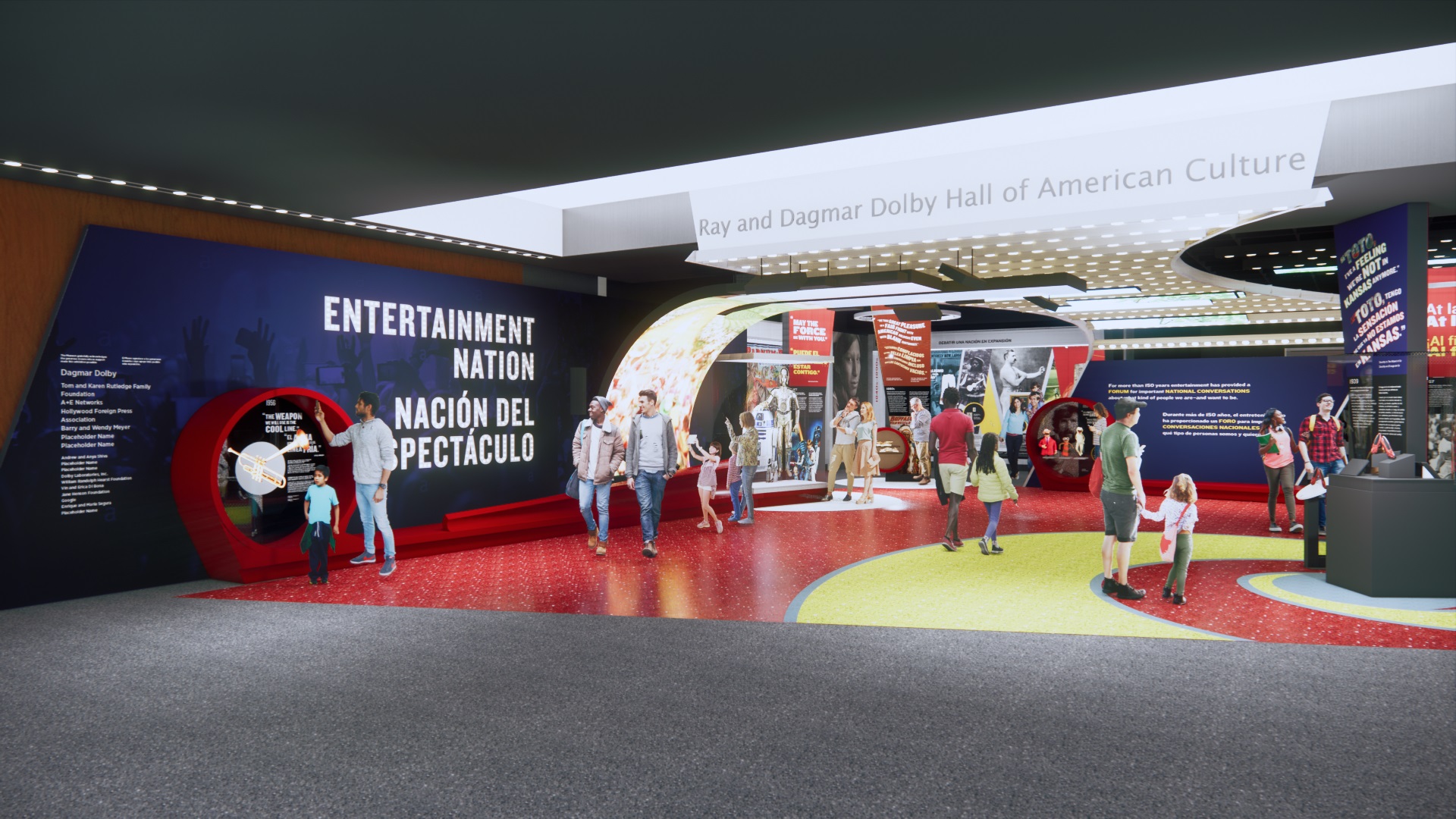 From its red-carpet entryway to a yellow brick road, the new permanent exhibition “Entertainment Nation”/“Nación del espectáculo,” opening Dec. 9 at the Smithsonian’s National Museum of American History, will immerse visitors in the dramatic arc of the nation’s story as told through the power and influence of theater, television, film, music and sports. With more than 200 objects on display, the 7,200-square-foot, bilingual, multimedia exhibition in the Ray and Dagmar Dolby Hall of American Culture will be the Smithsonian’s first dedicated exploration of entertainment history. Through iconic objects from the museum’s renowned collection and graphics, video and compelling stories, “Entertainment Nation”/“Nación del espectáculo” will showcase how Americans have long used entertainment to both elicit delight and understand different viewpoints.

Audiences will be captivated by objects from culture makers such as Muhammad Ali and Ali Wong who broke barriers, Tejana singer Selena, Star Wars’ C-3PO and R2-D2 and the enduring magical pull of the Ruby Slippers and the charm of the first Muppets. State-of-the-art Dolby Atmos immersive sound will enhance the experience through a custom playback system designed to transport museum visitors into the exciting world of the movies.

“The power of American entertainment lies in the rich diversity and power of its voices,” said Anthea M. Hartig, Ph.D., the museum’s Elizabeth MacMillan Director. “For generations, entertainers and athletes have used their platforms to reveal and respond to the nation’s many struggles, challenge injustice and create change. As the nation’s flagship and largest history museum, we are poised to help audiences better understand the value, role and influence of entertainment as most broadly defined.”

The gallery’s object spotlights, including one with the Ruby Slippers, will highlight compelling examples of how entertainment has shaped important conversations about society and politics.

Made possible by a lead gift from the Dolby family as the naming and Dolby Laboratories as exclusive audio sponsor and with support from Tom and Karen Rutledge, the exhibition also received support from A+E Networks, American Cruise Lines, Linda and Mike Curb, the Hollywood Foreign Press Association, and Barry and Wendy Meyer. Additional support was provided by Andrew and Anya Shiva, the William Randolph Hearst Foundation, the Jane Henson Foundation, Don and Maggie Buchwald, Vin and Erica Di Bona, Kiki Ramos Gindler and David Gindler, Google Arts & Culture and Enrique and Alejandra Segura.

Visitors to the open-concept gallery can examine how various types of entertainment provoked conversations about the invasion of Native lands, Reconstruction, civil rights, immigration and more. Micro-galleries within the space will illuminate complex topics on comedy, music and television through artifacts and multimedia. “Entertainment Nation”/“Nación del espectáculo” will conclude with a media presentation on how Hollywood films have explored the themes of love, heroes and belonging in the United States.

In addition to the anchor exhibition, the museum’s new third-floor Culture Wing will also feature a Hall of Culture and the Arts changing-exhibition gallery with the premiere exhibition “(re) Framing Conversations: Photographs by Richard Avedon, 1946–1965” and a Gaming History Video Wall installation. Cases devoted to new acquisitions frame the jewel box Nicholas F. and Eugenia Taubman Hall of Music and its intimate galleries displaying classical instruments and objects from jazz icons. The “Ray Dolby Gateway to Culture,” featuring a 14-foot stained-glass landmark depicting the iconic RCA trademark: the dog “Nipper” listening to his owner’s voice, welcomes visitors to the wing. Public programs and performances will complement the new exhibitions and themes. The museum’s signature Warner Bros. Theater will reopen simultaneously Dec. 9, with the Dolby family as the exclusive audio/visual sponsor for the space. Newly equipped with Dolby Vision and Dolby Atmos immersive sound, the 264-seat Warner Bros. Theater will provide an unparalleled presentation space for performances, movie premieres, film forums and other special events. The theater is fully equipped to present films in many formats, including nitrate, 35 mm, 70 mm and laser projection supporting Dolby Vision, allowing viewers to see subtle details and ultra-vivid colors, creating multidimensional visuals.

Visitors can explore the content in-depth by viewing videos, listening to podcasts and reading more about the work behind “Entertainment Nation”/“Nación del espectáculo” through the companion website where the project’s curators share object selections and design ideas from the exhibition’s development process. When “Entertainment Nation”/“Nación del espectáculo” opens Dec. 9, a new bilingual website will present the virtual exhibition, a resource center and more. A sizzle reel provides a sneak peek at the new culture experience coming to the museum.

Through incomparable collections, rigorous research and dynamic public outreach, the National Museum of American History seeks to empower people to create a more just and compassionate future by examining, preserving and sharing the complexity of our past. The museum, located on Constitution Avenue N.W., between 12th and 14th streets, is open daily except Dec. 25, between 10 a.m. and 5:30 p.m. Admission is free. The doors of the museum are always open online and the virtual museum continues to expand its offerings, including online exhibitions, K–12 educational materials and programs. The public can follow the museum on social media on Twitter, Instagram and Facebook. For more information, go to https://americanhistory.si.edu. For Smithsonian information, the public may call (202) 633-1000.