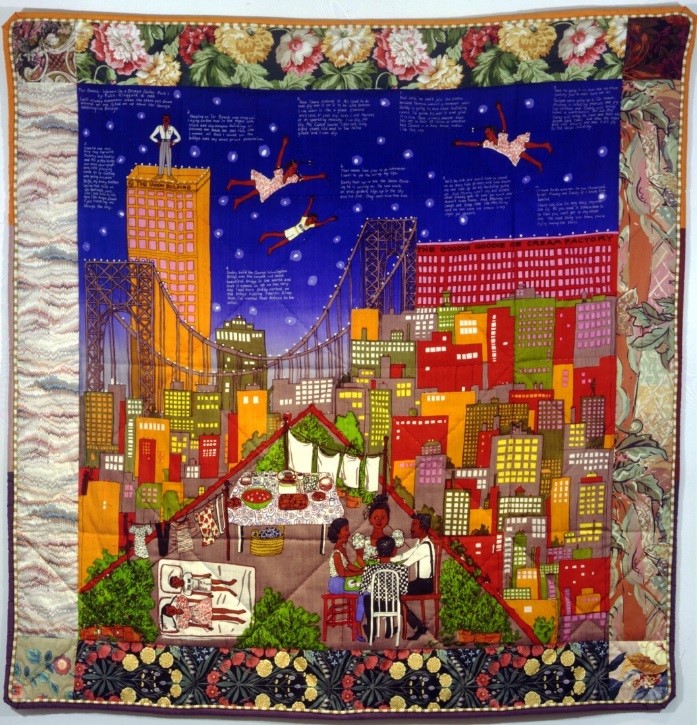 The Smithsonian Craft Show today announced that an exhibit of nine narrative quilts by artist Faith Ringgold will go on view at the National Building Museum April 27–May 7. The exhibit is jointly presented by the Smithsonian Women’s Committee and the National Building Museum and is on loan from the ACA Galleries in New York City. The opening day of the exhibit coincides with the beginning of the 2017 Smithsonian Craft Show, which runs April 27–30.

Ringgold is the recipient of the Craft Show’s 2017 Visionary Award, which recognizes an artist who has achieved distinction in the field of sculptural arts and design, whose works are in major museums and who has demonstrated innovation, creativity, artistry and vision in his or her respective medium.

“We are delighted to honor Faith Ringgold this year,” said Kathy Sommerkamp, Smithsonian Craft Show co-chair. “She is a multi-talented artist whose prolific career spans more than 50 years.”

“The development of Ringgold’s characteristic visual language and portrayal of serious thematic subjects are a testament to her belief in social justice for all,” said Dorian Bergen, president of ACA Galleries.

Ringgold is best known for her painted narrative quilts which were inspired by Buddhist tankas—painted and brocaded fabric pictures—and her mother’s work as a fashion designer. In the early 1970s Ringgold abandoned traditional oils for paintings in acrylic on unstretched canvas and fabric borders, and she has painted her signature story quilts ever since. Her work focuses on civil rights and gender equality, African American life and culture, family joys and hardships, and the education of children.

The exhibit features “Tar Beach #2” (1990–1992), which depicts Ringgold’s recollections of growing up in Harlem during the summer when the tar roof of a family’s apartment building served as a place for family picnics, star gazing and good times. Ringgold won a Caldecott Honor and the Coretta Scott King Award for her book Tar Beach, which is based on her story quilt of the same name.

The quilts in the exhibit are representative of Ringgold’s major themes: “Coming to Jones Road,” which depicts the path of the famous Underground Railroad to freedom; “Jazz Stories,” which portrays the famous musicians Ringgold listened to while growing up in Harlem; and “Declaration of Freedom and Independence,” which highlights social justice and freedom for all.

About the Smithsonian Craft Show

The 35th annual Smithsonian Craft Show will be held April 27–30 at the National Building Museum in Washington, D.C., with a preview night reception April 26. The show will feature 120 fine-art craft artists representing 34 states. The participants were chosen from more than 1,000 applicants, including many of the most accomplished artisans in the United States.

Proceeds from the Craft Show are distributed to the Smithsonian’s 28 museums and research centers (including the National Zoo) through an annual competitive grants program. The Smithsonian Women’s Committee has awarded almost $12 million in grants and endowments. For a list of recent grants, visit www.smithsoniancraftshow.org.

About the National Building Museum

The National Building Museum is America’s leading cultural institution dedicated to advancing the quality of the built environment by educating people about its impact on their lives. Through its exhibitions, educational programs, online content and publications, the museum has become a vital forum for the exchange of ideas and information about the world we build for ourselves. Public inquiries: (202) 272-2448 or visit http://www.nbm.org.