The Smithsonian announced today that it is exploring the possibility of opening an exhibition space in London at the new cultural complex being developed at the Queen Elizabeth Olympic Park, site of the 2012 Olympics. During its Jan. 26 meeting, the Smithsonian’s Board of Regents authorized Acting Secretary Al Horvath to develop terms for an agreement with the London Legacy Development Corp. (LLDC) that would establish a Smithsonian presence in the cultural center, known as “Olympicopolis.”

If an agreement is reached, it will mark the first time in the Smithsonian’s 168-year history that the Institution has ventured beyond U.S. borders for a long-term exhibition venue. The 40,000-square-foot gallery is expected to open in 2021 and will feature permanent and rotating exhibits, programs and activities.

London Mayor Boris Johnson and the LLDC have secured initial contributions of $50 million to construct the facility and to bring Smithsonian exhibits and programs to the city. Admission will be free for the Smithsonian’s permanent exhibition. The Smithsonian’s annual operating costs will be covered by private philanthropy and revenue from temporary-exhibit admission fees and retail activities. The exhibition space will not be supported with federal funds.

“This enterprising initiative from London Mayor Boris Johnson and the LLDC has tremendous potential,” said John McCarter, Chair of the Board of Regents. “The proposal is impressive and exciting. The Smithsonian greatly appreciates the opportunity to participate in the development process.”

The London exhibition space offers the Smithsonian an international showcase for its vast expertise in history, art, culture and science. Some exhibits displayed in London will tour U.S. cities, expanding the Smithsonian’s reach on both sides of the Atlantic.

“We see this as an unprecedented opportunity to show the breadth of the Smithsonian in one of the most diverse cities in the world,” said Horvath. “An exhibition space in London will enable us to share the Smithsonian with an international audience in a way we haven’t been able to before.”

“It is a huge honor for London to be considered as the first location for the Smithsonian outside of the U.S.,” said Johnson. “Queen Elizabeth Olympic Park is set to be home to a dynamic new world-class cultural quarter. We believe it is the perfect location for the Smithsonian, a unique and pioneering institution founded on the philanthropy of British-born James Smithson, in a move that would strengthen further still the links between our great nations.”

Other partners in the Olympicopolis project are the Victoria and Albert Museum, Sadler’s Wells Theatre, University College London East and the University of the Arts London. The 4.5-acre site where the Smithsonian exhibition space may be located is expected to host more than 1.5 million additional visitors a year when it opens in 2021.

Negotiations over the terms of the Smithsonian’s lease will begin immediately. The final terms and conditions will be subject to the approval of the Board of Regents’ executive committee.

This video clip shows the culture and university district of “Olympicopolis” that will be created on this triangular site (4.5 acres) located on Stratford Waterfront. The site is in front of the London Aquatics Centre and a few hundred yards from the former Olympic Stadium and ArcelorMittal Orbit sculpture and observation tower. (Credit: London Legacy Development Corp.) 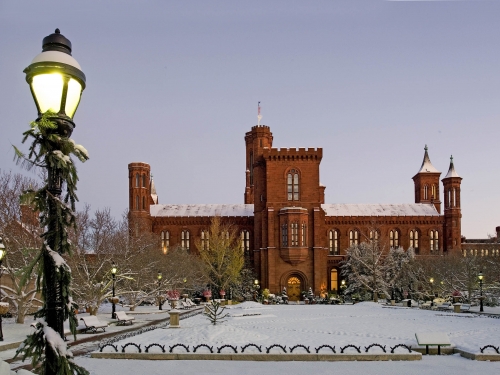