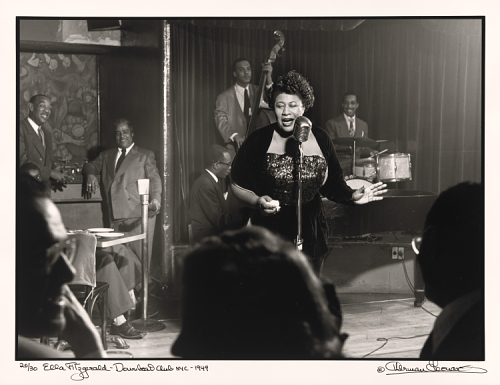 To celebrate the centennial of jazz legend Ella Fitzgerald (1917–1996), the Smithsonian’s National Museum of American History will unveil “Ella Fitzgerald: The First Lady of Song at 100,” a special display opening April 1. The exhibit will inaugurate the museum’s 16th annual Jazz Appreciation Month (JAM), which begins with a March 31 Smithsonian Jazz Masterworks Orchestra highlighting women in jazz.

JAM was founded at the National Museum of American History in April 2002 and is an annual event that pays tribute to jazz both as a historic and living American art form. It coincides with the April birthdays of such jazz giants as Fitzgerald, Duke Ellington, Billie Holiday, and Tito Puente.

“We celebrate the extraordinary heritage and history of American jazz by presenting programming and encouraging people of all ages to immerse themselves in the music that is the soundtrack to our history,” said Museum Director John Gray.

“Ella Fitzgerald: The First Lady of Song at 100” will explore Fitzgerald’s impact on American jazz culture through a collection of objects, sheet music and photographs. As one of the first African American female celebrities to appear in commercial print ad campaigns aimed at a general audience, Fitzgerald broke racial barriers. At the center of the display, visitors will be drawn to the iconic bright red, double-breasted two-piece suit, designed by Don Loper, as well as the red hat and white glasses she wore in the 1986 American Express print ad. The costume is depicted in an Annie Leibovitz photograph that will also be on view.

Also showcasing Fitzgerald’s extraordinary career will be a recording of her 1938 first hit “A-Tisket, A-Tasket,” and a selection from her 13 Grammy Awards, including her 1990 award for Best Female Jazz Vocal Performance, and four essential video clips. The display will include the commemorative broken goblet presented to Fitzgerald by Memorex Corp. for her participation in the “Is it Ella or is it Memorex?” campaign, an award medallion of the Kennedy Center Honors Lifetime Achievement Award she received in 1979 and covers from her albums Ella Swings Brightly, The First Lady of Song, Cole Porter Song Book and Ella and Louis. For more information about the exhibition, visit http://s.si.edu/EllaAt100.

Born April 25, 1917, in Newport News, Va., and raised in Yonkers, N.Y., Fitzgerald was orphaned at 15. A regular attendee at amateur musical events, she was “discovered” while signing at Harlem’s historic Apollo Theater and soon became a household name, widely known for her work with jazz luminaries such as Louis Armstrong, Dizzy Gillespie and Count Basie. Dubbed “The First Lady of Song,” Fitzgerald became widely recognized for her work, her superb rhythmic sense, considerable versatility and meticulous intonation. Especially renowned for her exceptional talent at “scat” singing, which put her on the level of great instrumental improvisers.

For more information about JAM events, visit http://s.si.edu/JAM2017. A full schedule of events follows below.

Through incomparable collections, rigorous research and dynamic public outreach, the National Museum of American History explores the infinite richness and complexity of American history. It helps people understand the past in order to make sense of the present and shape a more humane future. The museum is continuing to renovate its west exhibition wing, developing galleries on democracy and culture. The museum is located at 14th Street and Constitution Avenue N.W., and is open daily from 10 a.m. to 5:30 p.m. (closed Dec. 25). Admission is free. For more information, visit http://americanhistory.si.edu. For Smithsonian information, the public may call (202) 633-1000.

Celebrating the work of female composers, musicians, and orchestrators, with a special spotlight on Ella Fitzgerald, Mary Lou Williams and Lil Hardin Armstrong, the Smithsonian Jazz Masterworks Orchestra will explore the lasting influence of women in jazz.

“Smithsonian Jazz Objects Out of Storage”

Every Tuesday, the museum will present rarely seen jazz objects, instruments and archives from the museum’s collections for the public to view.

Every Thursday, the museum will feature three performances by local musicians and universities celebrating the role of women in jazz:

Throughout the last week of April, visitors can enjoy jazz performances by talented, local pianists. This program is in partnership with Big Band Jam! The American Federation of Musicians and Blues Alley.

“Cooking Up History: The Food of Jazz”

This program will explore the relationship between food, jazz and American history with guest chef Rock Harper, who will prepare dishes from America’s leading jazz communities.

Jazz on the Road

For tickets, visit the Capitol Theater at https://www.thecapitoltheatre.org.

To close out JAM 2017, The Smithsonian Jazz Masterworks Orchestra will present a special big band tribute to Ella Fitzgerald at the Capitol Theater in Chambersburg, Pa.