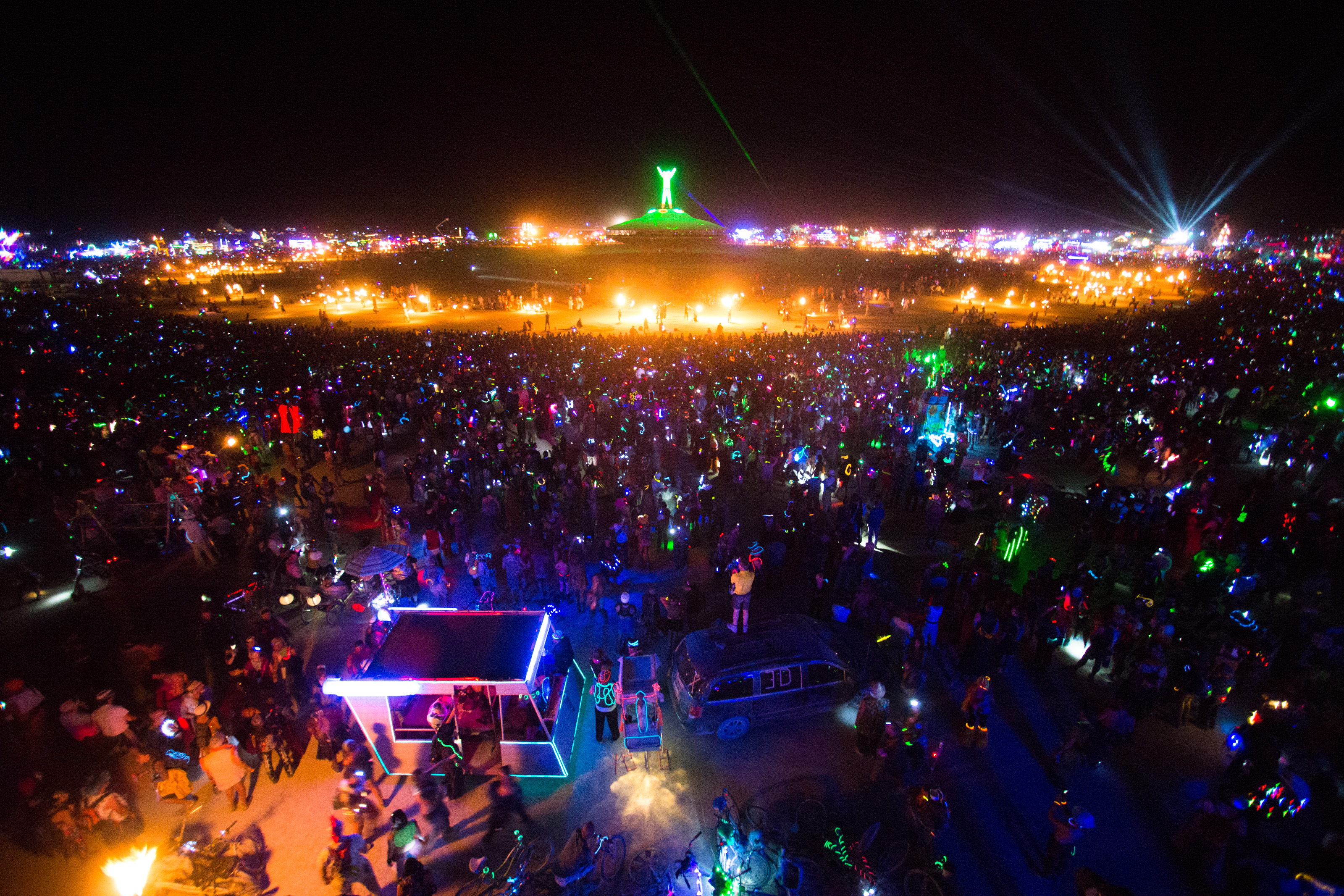 Each year in Nevada’s Black Rock Desert, a city of more than 70,000 people rises out of the dust for a single week. During that time, multistory experimental art installations and buildings are erected and many are burned to the ground. The thriving temporary metropolis known as Burning Man is a uniquely American hotbed of artistic ingenuity and one of the most influential events in contemporary art and culture. “No Spectators: The Art of Burning Man” is the first major exhibition to present the large-scale, participatory work that is the hallmark of this annual gathering, exploring Burning Man’s philosophies of radical self-expression, community participation, rejection of commodification and reverence for the handmade.

“No Spectators: The Art of Burning Man” will be on view at the Renwick Gallery, the Smithsonian American Art Museum’s branch museum dedicated to contemporary American craft, from March 30, 2018, through Sept. 16, 2018. The Renwick Gallery and Burning Man share a dedication to exploring maker culture in the United States and the vital role that creativity plays in innovation, connection and community. Nora Atkinson, the museum’s Lloyd Herman Curator of Craft, is organizing the exhibition in cooperation with Burning Man Project, the nonprofit organization responsible for facilitating and extending the culture that has issued from the Burning Man event into the wider world.

“This exhibition transports the art of Burning Man to a museum setting, so that audiences who cannot visit Black Rock City can encounter the cutting-edge work being created at this transformative annual event,” said Stephanie Stebich, The Margaret and Terry Stent Director of the Smithsonian American Art Museum and Renwick Gallery. “The Renwick Gallery and Burning Man are both creative laboratories where innovators go to play and to push the boundaries of their art. The experimental, participatory artwork of Burning Man reflects the Renwick Gallery’s focus on new directions in craft and making.”

The exhibition will take over the entire Renwick Gallery building, bringing alive the maker culture of Burning Man through artworks, room-sized installations, jewelry, costumes and ephemera that will transport visitors to the gathering’s famed desert location, the “playa.” Immersive works by individual artists and collectives will highlight the ingenuity and creative spirit of this cultural movement. Photographs and archival documents drawn from the Burning Man Archives at the Nevada Museum of Art and their exhibition “City of Dust: The Evolution of Burning Man” will trace Burning Man’s growth and its bohemian, counterculture roots.

“We are pleased to collaborate with the Renwick Gallery of the Smithsonian American Art Museum to bring the world a slice of the creativity that was born in Black Rock City,” said Marian Goodell, CEO of Burning Man Project. “Through this ambitious exhibition, more people will have a chance to engage with Burning Man’s ethos, which has given rise to a thriving year-round culture spurred by a growing global community of participants. We’re looking forward to this excellent opportunity to showcase the elements of Burning Man that are helping change the world around us for the better.”

The Smithsonian American Art Museum (SAAM) celebrates the vision and creativity of Americans with artworks in all media spanning more than four centuries. The Renwick Gallery is SAAM’s branch for contemporary craft and decorative arts. The Renwick is located on Pennsylvania Avenue at 17th Street N.W. and is open daily from 10 a.m. to 5:30 p.m. (closed Dec. 25). Admission is free. Follow the museum on Twitter, Instagram, Facebook, YouTube, Tumblr, Pinterest, Flickr, iTunes U and ArtBabble. Smithsonian information: (202) 633-1000. Museum information (recorded): (202) 633-7970. Website: americanart.si.edu.