First Comprehensive Exhibition About Artist in a U.S. Museum Since 1948
March 4, 2015
News Release 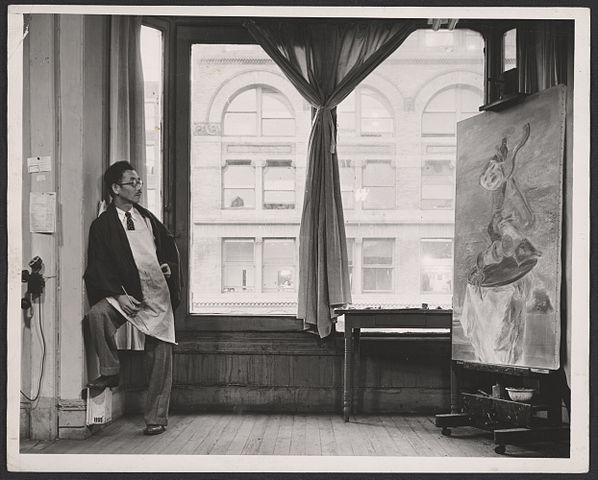 “The Artistic Journey of Yasuo Kuniyoshi” is the first comprehensive overview of the artist’s work by a U.S. museum in more than 65 years. The exhibition is a selective survey that will trace Kuniyoshi’s career though 66 of his finest paintings and drawings chosen from leading public and private collections in America and Japan. Most of the works from Japanese collections have not been exhibited in the U.S. for more than 25 years.

“The Artistic Journey of Yasuo Kuniyoshi” is co-curated by Joann Moser, deputy chief curator at the Smithsonian American Art Museum, and Tom Wolf, a Kuniyoshi scholar and professor of art history at Bard College. The exhibition will be on view from April 3 through Aug. 30; the Smithsonian American Art Museum is the only venue. A catalog written by Wolf will accompany the exhibition.

“Kuniyoshi remains one of our country’s most important and innovative modern artists, yet his work has not been widely exhibited for decades,” said Betsy Broun, The Margaret and Terry Stent Director of the Smithsonian American Art Museum. “We are proud that the Smithsonian American Art Museum will enable a new generation of viewers to encounter Kuniyoshi and his powerful, enriching paintings.”

“The evolution of Kuniyoshi’s art from his slyly humorous works in the 1920s, through his sensual and worldly paintings of the 1930s, to the darker works of his last years is a deeply human story, and the opportunity to see it in all its complexity and visual eloquence is a rewarding one,” said Wolf.

Kuniyoshi defined himself as an American artist while at the same time remaining very aware that his Japanese origins played an important role in his identity and artistic practices. He drew on American folk art, Japanese design and iconography and European modernism to create a sophisticated, distinctive mode of expression that integrated Eastern and Western styles. His inventive works often included subtle color harmonies, simplified shapes, oddly proportioned figures and an eccentric handling of space and scale.

“Kuniyoshi’s art—subtle and sophisticated, idiosyncratic and unique—defies easy categorization,” said Moser. “His paintings reveal a story of aspirations, disappointments, a striving for meaning and a place as an immigrant in America.”

Kuniyoshi (1889–1953) was a photographer and printmaker as well as a painter. He was born in Japan and came to the United States as a teenager, studying art in New York City in the Independent School and the Art Students League. He went on to teach at the Art Students League, to exhibit in prestigious exhibitions in the U.S. and abroad and to win major awards; among numerous other accolades he won first prize at the Carnegie International exhibition in 1944, was honored with the first retrospective exhibition of work by a living artist at the Whitney Museum in 1948 and exhibited at the Venice Biennale in 1952. He was active in politics in New York and was a member of several important artistic circles. His success, however, was shadowed by his immigrant status; though he was thoroughly integrated into American society and considered himself American, immigration law prevented him from becoming a citizen. During World War II, Kuniyoshi remained steadfastly loyal to the United States and put his talents to work as a poster artist to support the war effort; despite this, the U.S. government declared him to be an “enemy alien” in the wake of the attack on Pearl Harbor, and he faced increasing prejudice and harassment. Kuniyoshi remained active and influential in artist circles and continued to paint and teach until his death in 1953.

The Smithsonian’s Archives of American Art will present a separate, complementary exhibition titled “Artist Teacher Organizer: Yasuo Kuniyoshi in the Archives of American Art” from March 30 to July 10 in the Archive’s Lawrence A. Fleischman Gallery. Newly discovered papers, including the artist’s personal correspondence, photographs, writings and scrapbooks, will document the varied facets of Kuniyoshi’s prolific career as an artist, teacher and organizer of activist causes.

An online gallery of all of the artworks in “The Artistic Journey of Yasuo Kuniyoshi” will be available on the exhibition website americanart.si.edu/kuniyoshi, as will an essay by Moser on Kuniyoshi’s contribution to modernist art and a special Web feature on members of his artistic circle. Behind-the-scenes insights about the exhibition will be published on the museum’s blog, Eye Level.

A series of free public programs will complement the exhibition. Wolf will discuss the exhibition and his recent findings on Kuniyoshi and his artistic circle Friday, April 10, at 6:30 p.m. in the museum’s McEvoy Auditorium; this program will be webcast live on the museum’s website at americanart.si.edu/multimedia/webcasts. The 21st Century Consort, the museum’s ensemble in residence, will present “Worlds Away,” a concert inspired by Kuniyoshi’s works Saturday, April 18, at 4 p.m. Moser will lead a tour of the exhibition Thursday, May 7, at 5:30 p.m. In addition, the museum will present a “Cherry Blossom Family Celebration” Saturday, April 4, from 11:30 a.m. to 3 p.m. as part of the National Cherry Blossom Festival. For additional information about programs, the public may visit americanart.si.edu/calendar.

“The Artistic Journey of Yasuo Kuniyoshi” is accompanied by a catalog with an essay on Kuniyoshi by Wolf and an introduction by Broun. It is published by the Smithsonian American Art Museum in association with D Giles, Ltd. The book is for sale in the museum’s store and online ($59.95, hardcover; $40, softcover).

“The Artistic Journey of Yasuo Kuniyoshi” is organized by the Smithsonian American Art Museum. American Honda Motor Co. Inc. provided leadership support for the exhibition. The museum is especially grateful to Mr. Soichiro Fukutake for his major support of the book and exhibition, for his generosity in lending artworks from the Fukutake Collection in Okayama and for his long advocacy for this artist. Additional generous contributions have been provided by All Nippon Airways Co. Ltd., the E. Rhodes and Leona B. Carpenter Foundation, the Fukutake Foundation, the Raymond J. and Margaret Horowitz Endowment, the Japan-United States Friendship Commission, Peter and Paula Lunder, Friends of Franklin Riehlman, the Sara Roby Foundation, the Share Fund and Yasuda Fine Arts Inc.