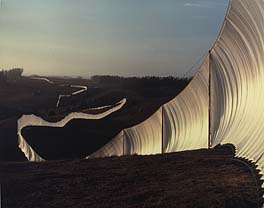 The most lyrical of Christo and Jeanne-Claude’s epic projects was the “Running Fence, Sonoma and Marin Counties, California, 1972-76.” The ambitious scope and enormous size of this monumental temporary artwork are hard to imagine even today. The exhibition “Christo and Jeanne-Claude: Remembering the ‘Running Fence,’” on view at the Smithsonian American Art Museum April 2 through Sept. 26, captures the elaborate process of planning the work and the magnitude of its scale. It is organized by George Gurney, the museum’s deputy chief curator.

“Running Fence,” the culmination of 42 months of collaborative efforts, was 24 1/2 miles long and 18 feet high, with one end dropping into the Pacific Ocean. The artwork was made of 240,000 square yards of heavy, woven, white nylon fabric, 90 miles of steel cable, 2,050 steel poles, 350,000 hooks and 14,000 earth anchors. Paid for entirely by Christo and Jeanne-Claude, the completed “Running Fence” existed for only two weeks in September 1976. It survives today as a memory and through the artwork and documentation by the artists. In 2008, the Smithsonian American Art Museum acquired the definitive record of “Running Fence,” which includes drawings, collages, photographs and documents. It is the first and only major Christo and Jeanne-Claude project archive acquired by a museum.

“Seeing the ‘Running Fence’ was a transformative experience,” said Elizabeth Broun, The Margaret and Terry Stent Director at the museum. “It was a fence that didn’t divide people but instead brought them together. The exhibition, the book and the related films recapture the excitement that still lives in the memory of those who saw the ‘Running Fence’ 34 years later, and they reintroduce the work to a new generation.”

The collective archive of artworks and related materials includes more than 350 individual items, the majority of which are presented in the exhibition. There are 46 original preparatory drawings and collages by Christo on display, including eight masterful, large-scale drawings, each 8 feet wide, and a 58-foot-long scale model. More than 240 photographs by Wolfgang Volz, Gianfranco Gorgoni and Harry Shunk reveal the complex process of constructing the “Running Fence” and the many personalities involved with the project. A sequence of 22-feet-wide high-definition images of “Running Fence” will be projected at the exhibition entrance to convey to visitors the breadth and scale of the completed project. The exhibition also includes components from the actual project, including a nylon fabric panel and steel pole.

The museum has commissioned a new film, The “Running Fence” Revisited, created for the exhibition by Wolfram Hissen, who has documented many other projects by the artists during the past 20 years. It will be shown regularly in the exhibition galleries, as will “Running Fence” (1978), a film by the legendary American filmmakers Albert and David Maysles, with Charlotte Zwerin, that chronicles the unpredictable and ever-changing path that led to the completion of “Running Fence” and “Running Fence” with Commentary (2004, Plexifilm).

The “Running Fence” is one of the artists’ most important early public art projects. When it was installed in 1976, it was the most ambitious work undertaken by Christo and Jeanne-Claude since their 1964 arrival in the United States. It captured the public’s imagination when it was unveiled during America’s bicentennial. The sheer beauty of the light and weather playing across the fabric of the fence stood in sharp contrast to the underlying issue of division and limitations that fences generally convey. The planning, design, installation and critical response to the “Running Fence” set the tone for each of their subsequent major public projects.

Christo and Jeanne-Claude faced seemingly insurmountable challenges from 1972 when “Running Fence” was first conceived until 1976 when it was completed. In addition to negotiating land rights with 59 ranchers, the artists grappled with bureaucratic hurdles at a time when the artists had no fame to pave the way. Christo and Jeanne-Claude convinced ordinary Americans of the transformative power of art.

Jeanne-Claude was deeply involved in all aspects of the exhibition before her sudden death Nov. 18, 2009. The exhibition catalog and commissioned film are dedicated to her memory.

Interactive Features
The galleries will include searchable digital presentations on three interactive kiosks so that the entire “Running Fence” archive is available to visitors. One features photographs and commentaries from the ranchers who helped to make “Running Fence” possible. Another kiosk presents the project’s “Environmental Impact Report,” the first ever commissioned for an artwork, as a digital book. A third includes all the documents from the archive, including items that could not be physically displayed in the exhibition. Content from the kiosks also will be available on the exhibition Web site, http://americanart.si.edu/exhibitions/archive/2010/christo/. In addition, a slideshow of selected works included in the exhibition is online, with commentaries from visitors and people who saw “Running Fence.” The public is encouraged to join the discussion by contributing their thoughts about the exhibition and memories of “Running Fence” and other projects by Christo and Jeanne-Claude.

Publication
The accompanying book, co-published by the museum and University of California Press, is written by Brian O’Doherty, artist and writer, with contributions from Broun; Ed Anderson, an attorney who represented the artists at the Sonoma County hearings in the 1970s; and a foreword by Wayne Clough, Secretary of the Smithsonian Institution. It will be for sale ($50 hardcover) in the museum’s store and online.

Film
The “Running Fence” Revisited, co-produced by the museum and Hissen from EstWest Films, recaptures the excitement and the memories of the people who recall the “Running Fence,” including interviews with the artists as well as some of the ranchers and their families. The film’s premiere will coincide with the exhibition opening, and it will be shown regularly in the exhibition galleries.

Free Public Programs
The premiere of The “Running Fence” Revisited, followed by a conversation with Christo and Hissen, is Friday, April 2, at 7 p.m. in the museum’s McEvoy Auditorium. Free tickets will be distributed in the G Street lobby one hour before the program.

The museum is presenting a series of films by David and Albert Maysles about projects by Christo and Jeanne-Claude. The series begins with Running Fence (1978) Thursday, April 8, at 6:30 p.m., followed by Christo in Paris (1986) and Christo’s Valley Curtain (1973) Thursday, April 29, at 6:30 p.m. with an introduction by Albert Maysles; and concludes with Umbrellas (1994) Thursday, May 27, at 6:30 p.m. Tickets are required for the April 29 program and will be distributed on a first-come, first-served basis one hour before the screening.

Additional programs include a gallery talk by Gurney Tuesday, April 13, at 5:30 p.m.; a gallery talk about conserving the “Running Fence” archive with Conservators Helen Ingalls and Kate Maynor Thursday, April 29, at 5:30 p.m.; and two special installments of the workshop “Sketching: Draw and Discover!” Tuesday, April 20 and May 18, from 3 p.m. to 4:30 p.m. in the Luce Foundation Center. A presentation of the film Christo and Jeanne-Claude, To the German People, Wrapped Reichstag 1971-1995 (1996, EstWest Films) Wednesday, May 12, at 6 p.m. in the McEvoy Auditorium will be introduced by Klaus Scharioth, ambassador of Germany to the United States and followed by a discussion with Christo and Hissen. Free tickets to this screening are required and will be distributed in the G Street lobby one hour before the program.

Details and complete program descriptions are available online at americanart.si.edu.

Note to editors: Selected high-resolution images for publicity only may be downloaded from the museum’s online press room at americanart.si.edu/pr. Call (202) 633-8530 for the password.