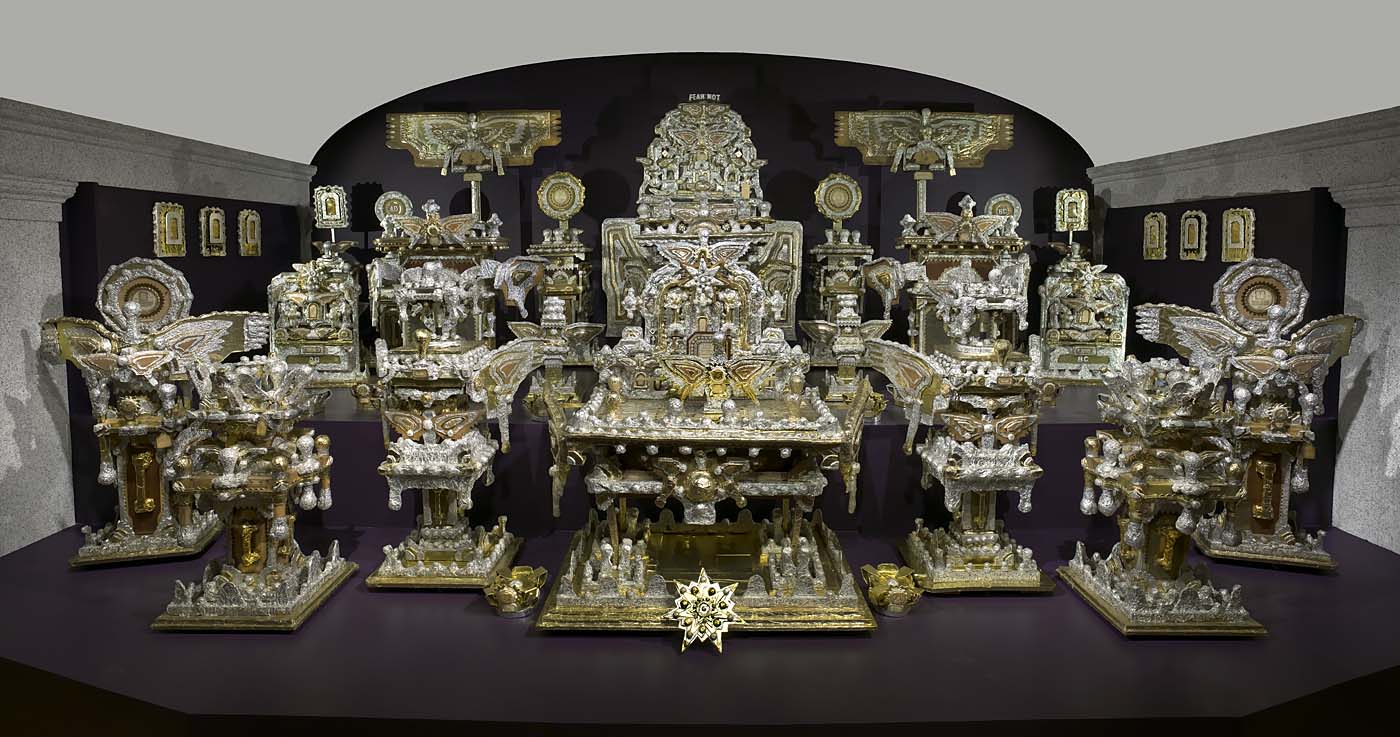 The Smithsonian American Art Museum’s collection of folk and self-taught art represents the powerful vision of America’s untrained and vernacular artists. Represented in the museum’s collection are pieces that draw on tradition—such as quilts—and artworks that reveal a more personal vision. The museum has reimagined its permanent collection galleries to feature 59 recent acquisitions, an expanded presentation of the beloved “Throne of the Third Heaven of the Nations Millennium General Assembly” by James Hampton, reopened historic windows and new oak floors. The galleries open to the public Friday, Oct. 21.

“The Smithsonian American Art Museum has long recognized folk and self-taught art as integral to the greater story of American art,” said Betsy Broun, The Margaret and Terry Stent Director of the Smithsonian American Art Museum. “The museum’s mission to tell the story of America through the art of its people is particularly relevant at a time when museums everywhere are realizing that an expanded narrative of what American art is is necessary for engaging and satisfying contemporary audiences and accurately portraying the scope of creativity in this country.”

“The first-floor galleries for folk and self-taught art should have a powerful impact on visitors, conveying not only the museum’s commitment to diverse American narratives and manifesting the tremendous quality, depth and power that art by untrained artists can have, but also affirming its rightful position in a museum of great art,” said Leslie Umberger, the museum’s curator of folk and self-taught art.

Since it acquired Hampton’s “Throne” in 1970, the museum has been recognized internationally as a leader in championing the importance of works by artists who have no formal art training. Subsequent acquisitions, including major collections from Herbert Waide Hemphill Jr., Chuck and Jan Rosenak, and David L. Davies in the 1980s and 1990s, as well as recent selections by Umberger, have resulted in the museum becoming one of the only major American museums to clearly advocate for a populist and uniquely American voice within the context of great art.

On public view for the first time in the new installation of the “Throne” are Hampton’s personal journal, written primarily in an asemic, or unreadable script, and a chalkboard showing some plans for the “Throne” sketched by Hampton. The journal will be on display for a limited time. While the “Throne” may have been viewed as idiosyncratic visionary art when it was first acquired, it has become increasingly understood as a seminal representation of African American cultural and artistic heritage, a complex piece that embodies not just the artist’s personal vision but also a cultural tradition of giving visual testimony to spiritual beliefs.

“Studies in African American vernacular art advanced because the Smithsonian American Art Museum took the ‘Throne’ seriously as a work of art long before anyone fully grasped what it was,” Umberger said.

In addition to the 126 works on view on the first floor, folk and self-taught artists are featured throughout the museum’s galleries as part of the larger story of visual expression in America. For example, a major painting by Grandma Moses, “Grandma Moses Goes to the Big City,” hangs in the American Experience galleries; a painting by Horace Pippin hangs in the early modernist galleries; a painting on paper by George Widener hangs in the Lincoln Gallery; and William Edmondson’s iconic “Talking Owl” is on view in the Direct Carving installation. The museum’s permanent collection galleries on the second floor feature two galleries for folk and self-taught works that predate the 20th century, and additional works—old favorites and recent acquisitions alike—remain on view in the museum’s Luce Foundation Center on the third floor.

An illustrated checklist and additional information are available on the museum’s website in an online press kit.

Experts in the field of folk and self-taught art discuss the importance of fostering an appreciation for these complex and highly personal works Saturday, Oct. 29, at 5:30 p.m. The panel features Tom DiMaria, director of the Creative Growth Art Center in Oakland, Calif.; Bernard L. Herman, professor of Southern studies and American studies at the University of North Carolina at Chapel Hill; Katherine Jentleson, curator of folk and self-taught art at the High Museum of Art in Atlanta; and Philip March Jones, director of the Andrew Edlin Gallery in New York City; Umberger will moderate the discussion. The program will be webcast live and archived on the museum’s website. Nancie Ravenel, objects conservator at the Shelburne Museum in Vermont, discusses the conservation of American folk art Thursday, Jan. 26, at 4 p.m. in the museum’s MacMillan Education Center. Details are available online at americanart.si.edu/calendar.