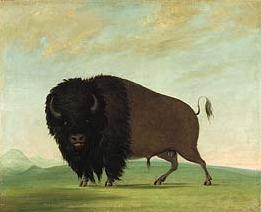 American artist George Catlin (1796–1872) journeyed west five times in the 1830s, traversing the Great Plains where he visited and painted more than 140 American Indian tribes. The exhibition “George Catlin’s American Buffalo” presents 40 original Catlin paintings from the Smithsonian American Art Museum’s collection to show the crucial role of the buffalo in Plains Indian culture. The museum holds the nearly complete surviving set of Catlin’s first Indian Gallery—more than 500 works—painted from life in the 1830s. The exhibition is organized by the museum in collaboration with the National Museum of Wildlife Art in Jackson Hole, Wyo. Adam Duncan Harris, the Petersen Curator of Art and Research at the National Museum of Wildlife Art, is the guest curator.

“Catlin’s Indian Gallery is an unparalleled collection of great artistic and historical significance that contributes to understanding America’s frontier and the cultures of the Plains Indian tribes,” said Elizabeth Broun, The Margaret and Terry Stent Director of the Smithsonian American Art Museum. “This exhibition features the paintings showing the ways Native American life centered on the buffalo, consistent with the National Museum of Wildlife Art’s focus on humanity’s relationship with nature.”

Catlin was among the earliest artists of European descent to travel beyond the Mississippi River to record what he called the “manners and customs” of American Indians, painting scenes and portraits from life. His intention was to document these native cultures before, as he feared, they were irrevocably altered by settlement of the frontier and the mass migrations forced by the Indian Removal Act of 1830. Catlin recorded the massive herds of buffalo that roamed the Great Plains of the American West. In chronicling the lifeways of Plains Indian cultures, he captured the central importance of the buffalo in the daily lives of American Indian tribes, from food and shelter to ceremony and naming.

Catlin was a prolific writer as well as a painter. In the 1830s, Catlin wrote that without some greater measure of restraint on the part of advancing settlers, the buffalo would soon be eradicated from the Great Plains. He called for the United States to establish a national park as a sanctuary for both bison and the American Indians he encountered on the plains. His vision came true, in part, in 1872 with the foundation of Yellowstone, the world’s first national park, set aside for the benefit and enjoyment of the American people.

In his illustrated essay and commentary on Catlin’s paintings, Harris explores the artist’s representation of the close relationship between Native Americans and the buffalo. Using Catlin’s own writings, he also considers the artist’s role as an early proponent of wilderness conservation and the national park idea, and how that advocacy remains relevant today—to the Great Plains, the buffalo and land use, including a movement today to create a “buffalo commons.”

Catlin, a lawyer turned painter, decided in the 1820s that he would make it his life’s work to record the life and culture of American Indians living on the Great Plains. In 1832, he made an epic journey that stretched over 2,000 miles along the upper Missouri River. St. Louis became Catlin’s base of operations for the five trips he took between 1830 and 1836. Catlin traveled the frontier, painting landscapes and portraits of native tribes to document their lives and customs. He produced hundreds of canvases, which he called his Indian Gallery. Ambitious in scope, and filled with color and closely observed detail, the Indian Gallery remains one of the wonders of the 19th century. Catlin’s dream was to sell his Indian Gallery to the U.S. government so that his life’s work would be preserved intact. After several failed attempts to persuade various officials, he toured with it in Europe in the 1840s. He was forced to sell the original Indian Gallery due to personal debts in 1852. Catlin then spent the last 20 years of his life trying to re-create his collection.

In 1872, Catlin came to Washington, D.C., at the invitation of Joseph Henry, the first secretary of the Smithsonian. Until his death later that year, Catlin worked in a studio in the Smithsonian’s “Castle.” A Philadelphia collector’s widow donated the original Indian Gallery—more than 500 works—to the Smithsonian in 1879.

A catalog accompanies the exhibition, with an essay and entries on each artwork in the exhibition by Harris. The book is published by the Smithsonian American Art Museum in association with D Giles Limited, London. It is available for purchase for $49.95 (hardcover only).

“George Catlin’s American Buffalo” is organized by the Smithsonian American Art Museum in collaboration with the National Museum of Wildlife Art in Jackson Hole, Wyo. Generous support for the exhibition has been provided by Mary Anne and Richard W. Cree, and Lynn and Foster Friess. Additional support for the exhibition and the publication was provided by the William R. Kenan Jr. Endowment Fund and the Smithsonian Council for American Art. Support for “Treasures to Go,” the museum’s traveling exhibition program, comes from The C.F. Foundation, Atlanta.

The Smithsonian American Art Museum celebrates the vision and creativity of Americans with artworks in all media spanning more than four centuries. The Smithsonian American Art Museum’s traveling exhibition program has circulated hundreds of exhibitions since it was established in 1951.Its National Historic Landmark building is located at Eighth and F streets N.W., above the Gallery Place/Chinatown Metrorail station. Museum hours are 11:30 a.m. to 7 p.m. daily (closed Dec. 25). Admission is free. Follow the museum on Twitter, Facebook, Pinterest, Flickr, ArtBabble, iTunes and YouTube. Museum information (recorded): (202) 633-7970. Smithsonian information: (202) 633-1000. Website: americanart.si.edu.