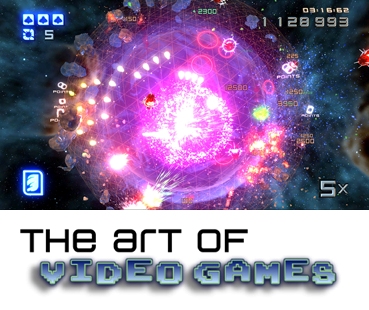 The Smithsonian American Art Museum is inviting the public to help select the video games that will be included in its upcoming exhibition “The Art of Video Games,” which opens in Washington, D.C. March 16, 2012. The exhibition is the first to explore the 40-year evolution of video games as an artistic medium, with a focus on striking visual effects and the creative use of new technologies. Chris Melissinos, founder of Past Pixels and collector of video games and gaming systems, is the curator of the exhibition.

Voting will take place online, www.artofvideogames.org, from Feb. 14 until midnight, April 7. A valid e-mail address is the only requirement to vote. The website will offer participants a chance to vote for 80 games from a pool of 240 proposed choices in various categories, divided by era, game type and platform. The winning games will be displayed in the exhibition as screen shots and short video clips. The website will include an online forum where gaming enthusiasts can campaign for particular games and voice their opinions about the selections.

The games on the voting site were selected for their graphic excellence, artistic intent and innovative game design. Results will be available online in May.

“Playing video games involves many personal choices, so, in keeping with the spirit of the exhibition’s content, we want to involve the public in helping us select games for the exhibition,” said Elizabeth Broun, The Margaret and Terry Stent Director of the Smithsonian American Art Museum.

“I want this exhibition to include the collective voice of the video game world, which is not limited to the developers, designers and artists but also the game players,” said Melissinos. “It is important to me that when gamers visit the exhibition, they find the experiences that most matter to them.”

The games on the ballot were selected by Melissinos and reviewed by the exhibition’s advisory group consisting of game developers, designers, industry pioneers and journalists. The full list of members is available in the museum’s online press kit for the exhibition, http://americanart.si.edu/pr/kits/#taovg.

“The Art of Video Games” will feature some of the most influential artists and designers during five eras of game technology, from early developers such as David Crane and Warren Robinettto contemporary designers like Kellee Santiago and David Jaffe. New technologies have allowed designers to create increasingly interactive and sophisticated game environments while staying grounded in traditional game types. The exhibition will feature 80 games and 20 gaming systems ranging from the Atari VCS to the PlayStation 3.