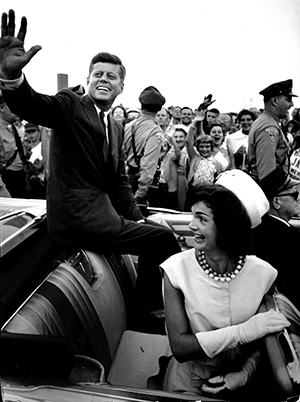 A new exhibition commemorating President John F. Kennedy’s life and work will be on view at the Smithsonian American Art Museum’s main building from May 3 through Sept. 17. “American Visionary: John F. Kennedy’s Life and Times” brings together 77 images culled from the John F. Kennedy Presidential Library, the John F. Kennedy Library Foundation, Getty Images, private collections and the Kennedy family archives that capture the dramatic scope of Kennedy’s life. The exhibition is one of the most exhaustively researched collections of Kennedy photos ever assembled. “American Visionary” is based on the forthcoming book JFK: A Vision for America.

The museum’s presentation of “American Visionary” is the first event in the John F. Kennedy Presidential Library and Museum’s yearlong, nationwide celebration that commemorates Kennedy’s centennial year. The exhibition opens in time for what would have been Kennedy’s 100th birthday on May 29.

Kennedy’s administration coincided with a golden age of photojournalism in America. No single politician was photographed more than Kennedy—from his first congressional bid as a decorated war hero in 1946, his fairytale marriage to Jacqueline Bouvier in 1953, his run for the White House in 1960 and role as commander in chief, to the tragedy of his death in Dallas in 1963. Documentary photographers such as Ed Clark, Ralph Crane, Philippe Halsman, Jacques Lowe, Steve Schapiro and Sam Vestal captured the optimism and challenges of the early 1960s in some of the finest and most vivid images of the period. Many of the photographs on display are iconic.

The exhibition is organized by Lawrence Schiller of Wiener Schiller Productions; John Jacob, the museum’s McEvoy Family Curator for Photography, is coordinating the exhibition in Washington, D.C. The exhibition will travel to several cities across the United States following its presentation at the Smithsonian American Art Museum.

“John F. Kennedy is still seen as a symbol around the world, representing and espousing the best and most universal elements of the American character,” said Stephen Kennedy Smith, Kennedy’s nephew and co-editor of JFK: A Vision for America. “It is our hope that the compelling images of President Kennedy’s life and work on view in this exhibition will remind visitors not only of the values that defined his presidency, but also will introduce him to new audiences and future leaders.”

As part of the “JFK 100 Centennial Celebration,” the Kennedy Presidential Library and Museum is spearheading a series of events and initiatives across the nation aimed at inspiring new generations to find meaning in the enduring values that formed the heart of the Kennedy presidency—courage, freedom, justice, service and vision. In Washington, the museum is part of a citywide celebration with other cultural organizations including the John F. Kennedy Center for the Performing Arts, the Smithsonian’s National Portrait Gallery and the Smithsonian’s National Museum of American History, the White House Historical Association and the Newseum.

Visitors can join the conversation about the centennial celebrations at #JFK100. Information about upcoming exhibition-related programming at the museum will be available online at americanart.si.edu/jfk when details are confirmed.

The forthcoming book, JFK: A Vision for America, features Kennedy’s greatest speeches alongside essays by historians, leading political thinkers, writers and artists. The book presents Kennedy at his best—thought-provoking, inspiring, eloquent and wise—on a number of wide-ranging topics, including civil rights, the race to the moon, the environment, immigration, the Cuban Missile Crisis and more. JFK demonstrates the deep relevance of his words today and his lasting power and influence as an American leader and orator.

JFK: A Vision for America is edited by Smith and Douglas Brinkley, professor of history at Rice University; it is published by HarperCollins and will be available for purchase beginning May 2 the museum store ($45).

“American Visionary: John F. Kennedy’s Life and Times” is presented by the Smithsonian American Art Museum in cooperation with the John F. Kennedy Library and Foundation. Generous support for the exhibition has been provided by the Governance Institute and the Blanche and Irving Laurie Foundation. Additional support has been provided by Stephen Kennedy Smith, Wiener Schiller Productions and Getty Images. The presentation in Washington, D.C., is made possible by the Margery and Edgar Masinter Exhibitions Fund and the Bernie Stadiem Endowment Fund.