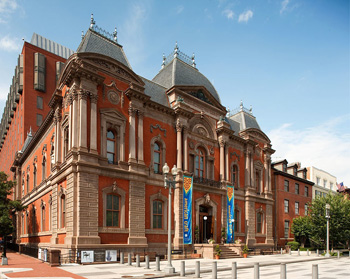 The Smithsonian American Art Museum has selected the 40 artists who will be featured in its upcoming exhibition “40 under 40: Craft Futures” that will be on view at its Renwick Gallery from July 20, 2012, through Feb. 3, 2013. Nicholas R. Bell, curator at the museum’s Renwick Gallery, selected the artists and is organizing the exhibition.

All of the artists in “40 under 40” were born since 1972, the year the museum’s contemporary craft and decorative arts program was established at its, branch museum, the Renwick Gallery. The exhibition investigates evolving notions of craft within traditional media such as ceramics and metalwork, as well as in fields as varied as sculpture, industrial design, installation art, fashion design, sustainable manufacturing and mathematics. The range of disciplines represented illustrates new avenues for the handmade in contemporary culture.

“40 under 40: Craft Futures” is presented in honor of the 40th anniversary of the Renwick Gallery. The museum intends to acquire artworks by every artist in the exhibition for the permanent collection, to mark the anniversary. The exhibition will tour nationally after it closes in Washington, D.C.

“When the Renwick Gallery opened in 1972, it introduced a new generation of artists to the American public,” said Elizabeth Broun, The Margaret and Terry Stent Director of the Smithsonian American Art Museum. “I am excited that we are poised now to introduce to the museum’s community these 40 young artists who will inspire a new generation of craft enthusiasts and collectors.”

“What ultimately unifies these artists, who originate from every region of the United States and five countries, are commonly held philosophies of craft’s role as a positive force in contemporary life,” said Bell.

Information about each artist is available through links on the exhibition page on the museum’s website. The public can join the conversation about the exhibition on Twitter by following @americanart and using #Renwick40.

A catalog is forthcoming. It will be written by Bell with contributions by Bernard L. Herman, the George B. Tindall Professor of American studies at the University of North Carolina, Chapel Hill; Michael Prokopow, associate professor, faculty of liberal studies at Ontario College of Art and Design; and Julia Bryan-Wilson, associate professor of art history at the University of California, Irvine.

About the Renwick Gallery of the Smithsonian American Art Museum

The Smithsonian American Art Museum celebrates the vision and creativity of Americans with works of art in all media spanning more than three centuries. The museum’s branch for craft and decorative arts, the Renwick Gallery, is located on Pennsylvania Avenue at 17th Street N.W. It is open daily from 10 a.m. to 5:30 p.m., except Dec. 25. Admission is free. Metrorail station: Farragut North (Red line) and Farragut West (Blue and Orange lines). Follow the museum on Twitter, Facebook, Flickr, ArtBabble, iTunes and YouTube. Museum information (recorded): (202) 633-7970. Smithsonian Information: (202) 633-1000; (202) 633-5285 (TTY). Website: americanart.si.edu.