Works Are Part of a Promised Gift That Will Anchor 2023 Exhibition
April 10, 2018
News Release 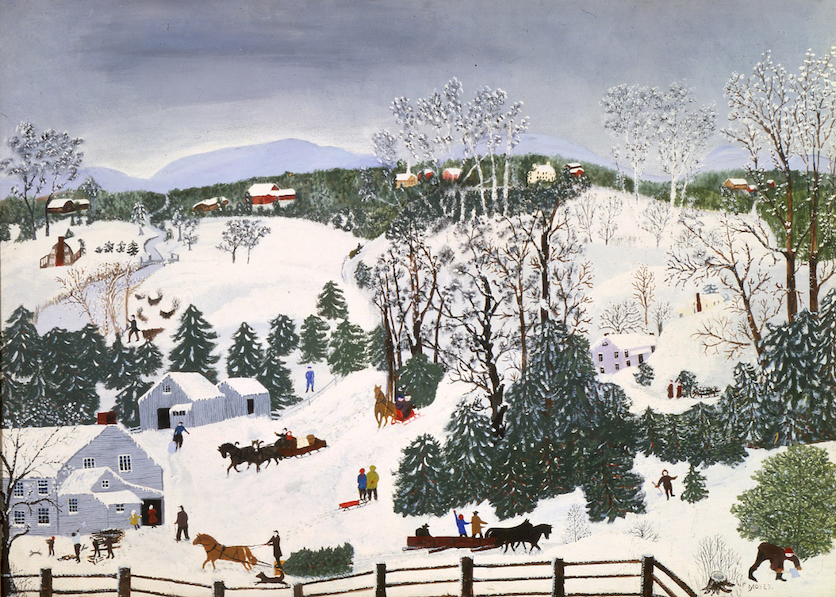 The Smithsonian American Art Museum announced that it has acquired three masterworks by beloved American painter Anna Mary Robertson “Grandma” Moses (1860–1961). The paintings are a gift of Jane Kallir and the Kallir family in memory of Otto Kallir, who first showed Moses’ work in his New York City Gallery, Galerie St. Etienne, in 1940, and who remained her steadfast supporter and collector. The three donations are the first of 10 major Moses paintings that the Kallir family has promised to give SAAM between now and 2026. A major traveling exhibition of Moses’ art is being planned at SAAM for fall 2023 and will feature all 10 works.

The three paintings, “Out for Christmas Trees” (1946), currently on view on the first floor, “Grandma Moses Goes to the Big City” (1946), on view in the Luce Center, and “Turkeys” (1958), are stellar examples of Moses’ colorful and lively style, which was inspired by her many decades as a farmwife. Capturing holidays and the spirit of the season, “Out for Christmas Trees” and “Turkeys” show rural life in full swing, while in “Grandma Moses Goes to the Big City,” the artist commemorated a significant milestone in her own life. Moses depicts herself at age 80 amidst the bustle of a working farm, about to embark on her first trip—by automobile—to New York City to see her own paintings on view at Galerie St. Etienne.

“The Smithsonian American Art Museum is dedicated to telling the story of the American experience, and Grandma Moses is a key part of this story,” said Stephanie Stebich, the Terry and Margaret Stent Director of the Smithsonian American Art Museum. “The Kallirs’ generous gift allows the museum to share Grandma Moses’ unique style and subjects across the arc of her career for the benefit of the public who has long been fascinated by this American original.”

Moses, born in 1860, captured a nation transitioning from the 19th to the 20th century. In the 1940s and especially in the 1950s, her style was viewed as quintessentially American and more accessible than postwar modern art. In 1953, she was featured on the cover of Time magazine, celebrated for her youthful spirit and the “old timey” style of her paintings and subject matter. While Moses’ art has been on view at SAAM for a number of years, her work only became part of the collection in 2015 when Charles Nelson Brower donated the painting “Christmas” (1958).

“Historically, women artist have too often been overlooked, and this issue is particularly acute among self-taught artists, whose work was often lost before it was ever appreciated,” said Leslie Umberger, SAAM’s curator of folk and self-taught art. “Moses was a notable exception; her work was appreciated and cared for, and she became both an American icon and a market success during her lifetime, a rarity on several levels. Both her story and her art are truly remarkable.”

Jane Kallir, co-director of the Galerie St. Etienne and the author of four books on Grandma Moses, has long stewarded the Moses research archive that Otto Kallir began compiling in 1940; she will serve as a consultant on the exhibition.

“I am thrilled that the Smithsonian American Art Museum has affirmed its commitment to Grandma Moses, and I hope that the museum will become a magnet for Moses scholars, as well as for the many Americans who love her work,” Kallir said.

SAAM has championed self-taught art as an embodiment of the democratic spirit since 1970, when it acquired and preserved James Hampton’s iconic “The Throne of the Third Heaven of the Nations’ Millennium General Assembly.” It is one of the only major American museums to advocate for a diverse populist voice within the context of what is traditionally considered great art. The museum shows folk and self-taught art throughout the museum and has had dedicated gallery spaces for such work for more than 45 years; a new installation of these galleries, organized by Umberger, opened in October 2016. “Between Worlds: The Art of Bill Traylor” opens at SAAM Sept. 28 and runs through March 17, 2019. Other recent exhibitions featuring self-taught artists included “Untitled: The Art of James Castle” (2014), “Ralph Fasanella: Lest We Forget” (2014) and “Mingering Mike’s Supersonic Greatest Hits” (2015).