Pivotal Work by One of the Most Influential American Sculptors of the 20th Century
December 17, 2015
News Release 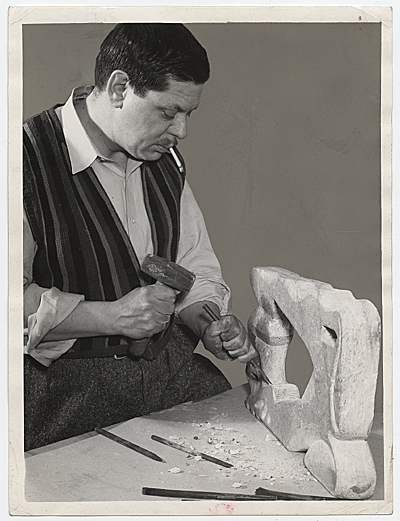 The Smithsonian American Art Museum announced today that it is acquiring “Agricola IV” by David Smith, one of the most influential and celebrated American sculptors of the 20th century. The sculpture, which is from a pivotal period in the artist’s career, is a gift from long-time museum supporters Sam Rose and Julie Walters.

The museum’s Board of Commissioners approved the acquisition at its Nov. 9 meeting.

Smith was the first American to sculpt directly in metal, a technique pioneered in the late 1920s by avant-garde European artists Julio Gonzáles, Pablo Picasso and Alberto Giacometti. Made from tools, metal plate and other utilitarian objects, Smith’s constructions radically challenged American notions of sculpture and especially the art deco aesthetic that dominated American galleries and public spaces in the 1930s.

“‘Agricola IV’ is a transformative acquisition, one that anchors the story of sculpture in America and shows how Smith changed the arc of visual expression in three-dimensions in the 20th century,” said Betsy Broun, The Margaret and Terry Stent Director at the Smithsonian American Art Museum.

Smith’s “Agricola” series draws its title from the Latin word for farmer. The 17 “Agricola” sculptures, his first major series, were constructed from discarded farm tools and machinery he found near his studio in Bolton Landing, N.Y. The airy, open form of the “Agricola” sculptures marked Smith as a powerful new force in American sculpture.

Smith began “Agricola IV” (1952) by tack welding elements laid out on the floor, then set them upright and attached additional pieces. The sculpture rises like a totem from the agrarian past, an emblem of a way of life mostly abandoned in the industrial age.

“Agricola IV” is currently on display at the museum in the exhibition “Crosscurrents: Modern Art from the Sam Rose and Julie Walters Collection” that examines the intellectual and artistic exchange between Europe and America throughout the 20th century. The 33 artists presented in the exhibition, including Smith, reflect many of the defining moments in what is now broadly called modernism. The exhibition, organized by Virginia Mecklenburg, chief curator, runs through April 10, 2016.

“Agricola IV” joins seven other artworks on view in “Crosscurrents” that are partial and promised gifts to the museum, including paintings by Marsden Hartley, Edward Hopper, Alex Katz, Georgia O’Keeffe and Wayne Thiebaud and an early sculpture, “Reclining Figure” (1935) by Smith.

The museum published a catalog to accompany the exhibition. “Crosscurrents: Modern Art from the Sam Rose and Julie Walters Collection” is organized by the Smithsonian American Art Museum with generous support from Robert Castellini in honor of James Dicke, the Gene Davis Memorial Fund, the James F. Dicke Family Endowment, Tania and Tom Evans, Paula and Peter Lunder, the Michael A. and the Honorable Marilyn Logsdon Mennello Endowment, the James F. Petersen Charitable Fund in honor of Tania and Tom Evans, and Pam and Scott Ulm.

The Smithsonian American Art Museum’s collection of American sculpture is one of the largest in the world, consisting of more than 2,000 examples that span the full range of expression in three dimensions. This unparalleled collection offers exceptional representation of several major movements, including neoclassicism, Beaux-Arts, art deco and direct carving, each represented respectively by more than 50 examples by Hiram Powers, Olin Levi Warner, Paul Manship and William Zorach. The collection include several one-of-a-kind examples that are mile markers in the history of American art, including Ferdinand Pettrich’s “The Dying Tecumseh,” Horatio Greenough’s “George Washington,” Alexander Calder’s “Nenuphar,” which was made specifically for the collection, Isamu Noguchi’s “Grey Sun” and “Sollie 17” by Edward Kienholz and Nancy Reddin Kienholz.

Note to editors: A high-resolution image of “Agricola IV” for publicity only may be downloaded from americanart.si.edu/pr. Email americanartpressoffice@si.edu for the password.