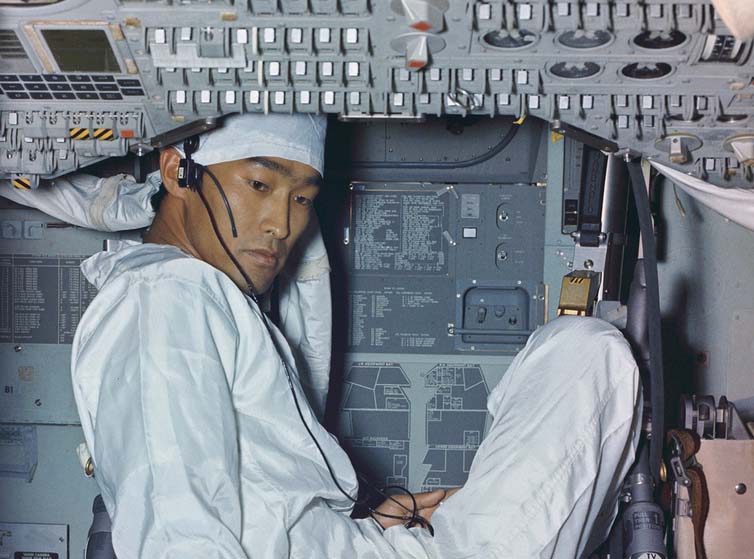 The National Air and Space Museum and the Smithsonian’s 3D Digitization Program have uncovered writing on the interior walls of the Apollo 11 command module Columbia while 3-D scanning the artifact. Unseen for almost 50 years, the markings include notes, figures and a calendar presumably written by the Apollo 11 astronauts during their historic flight to the moon. The project to digitize Columbia will make these details and many others, previously unseen by museum visitors, available online for the first time.

These markings give a glimpse into the first mission to land on the moon, crewed by Neil Armstrong, Buzz Aldrin and Michael Collins. Some of the markings include numbers and calculations relayed from mission control written on the wall near the navigational tools. There also seems to be a calendar written by one of the astronauts with each day crossed out except for landing day. Seeing such details and studying the text have enabled curators to enhance their understanding and compile a more complete account of how the missions were conducted. Research is being conducted to determine what the markings were for, which astronauts made them and what insights they provide about the historic trip that occurred between July 16 and 24, 1969.

“As curator of what is arguably one of the most iconic artifacts in the entire Smithsonian collection, it’s thrilling to know that we can still learn new things about Columbia,” said Allan Needell, curator of space history at the museum. “This isn’t just a piece of machinery, it’s a living artifact.”

The museum has been working with the Smithsonian’s 3D Digitization Program to scan the command module in 3-D to create a high-resolution interactive model of the entire spacecraft. This highly detailed model will allow researchers and the public to explore the entire craft, a feat not possible when viewing the artifact in the museum. The model will be available in June on 3d.si.edu and used to produce an interactive display in the museum’s exhibition “Destination Moon,” scheduled to open in 2020.

The 3-D scanning process for the command module was extremely challenging. The module is composed of reflective surfaces that 3-D capture devices do not read well. Its interior dashboards are made up of many components that are delicate and intricate, which also presents a challenge for many 3-D capture devices. Because of the complicated nature of this scan, the Smithsonian 3D team brought in its technology partner, Autodesk Inc. Autodesk, a leader in cloud-based design and engineering software, deployed specially designed equipment to scan the artifact, and its advanced Memento software was able to process complex data from multiple 3-D capture devices to create one highly detailed and accurate model.