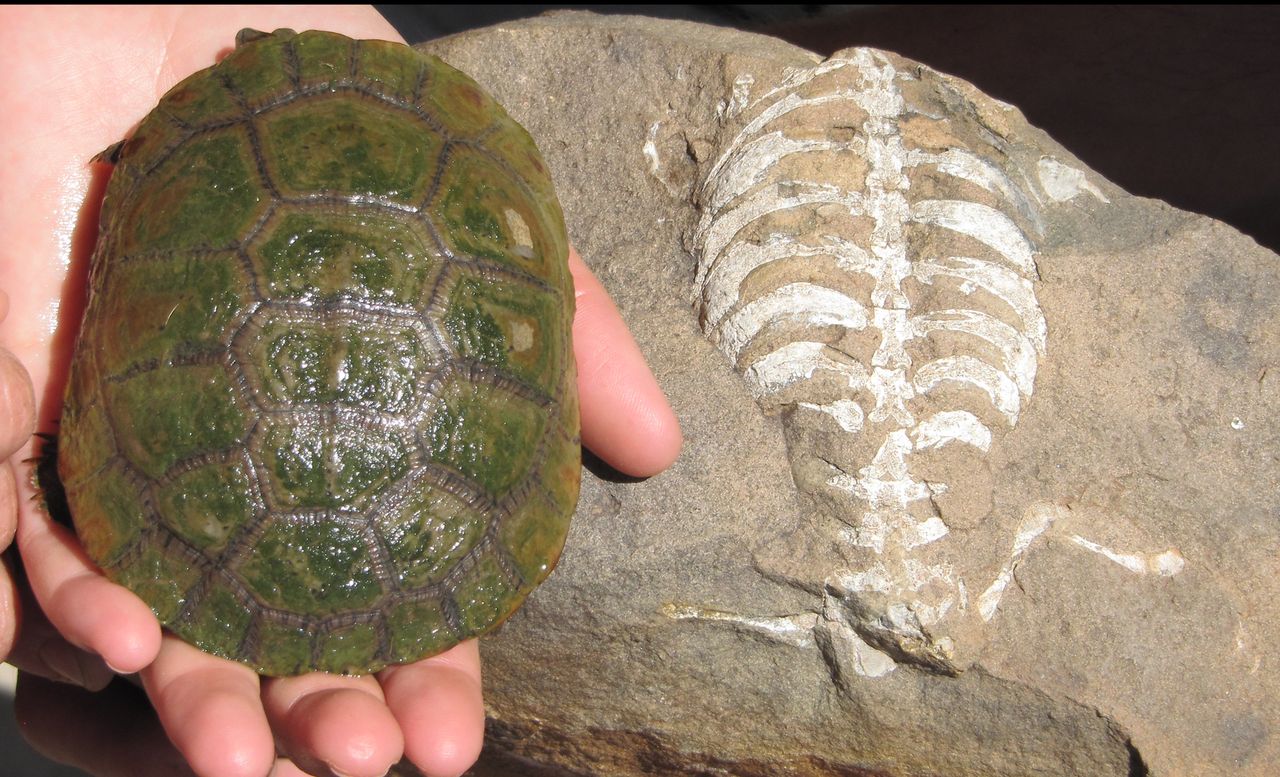 Unique among Earth’s creatures, turtles are the only animals to form a shell on the outside of their bodies through a fusion of modified ribs, vertebrae and shoulder girdle bones. The turtle shell is a unique modification, and how and when it originated has fascinated and confounded biologists for more than two centuries. A Smithsonian scientist and colleagues recently discovered that the beginnings of the turtle shell started 40 million years earlier than previously thought. The team’s research is published in the May 30 issue of Current Biology.

The oldest known fossil turtle dated back about 210 million years, but it had an already fully formed shell, giving no clues to early shell evolution. Then a clue came in 2008 when the 220 million-year-old fossil remains of an early turtle species, Odontochelys semitestacea, were discovered in China. It had a fully developed plastron (the belly portion of a turtle’s shell), but only a partial carapace made up of distinctively broadened ribs and vertebrae on its back. With this knowledge the scientists turned to newly discovered specimens of Eunotosaurus africanus, a South African species 40 million years older than O. semitestacea that also had distinctively broadened ribs. Their detailed study of Eunotosaurus indicated it uniquely shared many features only found in turtles, such as no intercostal muscles that run in between the ribs, paired belly ribs and a specialized mode of rib development, which indicates that Eunotosaurus represents one of the first species to form the evolutionary branch of turtles.

“Eunotosaurus neatly fills an approximately 30–55-million-year gap in the turtle fossil record,” said Tyler Lyson, a Peter Buck Postdoctoral Fellow at the Smithsonian’s National Museum of Natural History. “There are several anatomical and developmental features that indicate Eunotosaurus is an early representative of the turtle lineage; however, its morphology is intermediate between the specialized shell found in modern turtles and primitive features found in other vertebrates. As such, Eunotosaurus helps bridge the morphological gap between turtles and other reptiles.”

Ribs in most other animals protect internal organs and help ventilate the lungs to assist breathing. Because the ribs of turtles have been modified to form the shell, they have also had to modify the way they breathe with specialized muscles. This presents the team with their next challenge. They plan to examine the novel respiratory system in turtles and see how it evolved in conjunction with the evolution of the turtle’s shell.