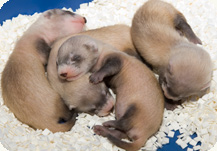 Once believed to be extinct, black-footed ferrets have had a banner year for breeding at the Smithsonian’s National Zoo’s conservation facility in Front Royal, Va. Twelve litters of black-footed ferrets have been born at the Smithsonian Conservation Biology Institute since May 7, including litters born to four females who have never before had kits.

“This is a really exciting time for us. Breaking last year’s records indicates that our husbandry and management practices are excellent,” said JoGayle Howard, a Zoo reproductive physiologist. “After many years of research, our knowledge about the reproductive biology of the black-footed ferret is extensive. This species comes into estrus, or heat, only once a year, and determining the optimal time for breeding is critical to reproductive success.”

Forty-eight kits born this year were offspring from natural breeding, while two were the result of artificial insemination. SCBI was the first to develop a successful artificial insemination technique for the species that deposits sperm directly into the uterus. To date, 145 kits have been produced by this laparoscopic artificial insemination method. SCBI maintains the only Genome Resource Bank for black-footed ferrets that preserves frozen semen from genetically valuable males. This semen is used for artificial insemination by Zoo scientists to maintain and even enhance genetic diversity by infusing valuable genes into the population. Each year, sperm are collected from male ferrets and frozen. Depending on its genetic value, this sperm may be used five to 20 years in the future.

“Species conservation is all about moving the population needle forward,” said David Wildt, head of the SCBI’s Center for Species Survival. “Every year it is essential that we tweak our husbandry while pushing our science forward, all in the name of increasing knowledge and improving production impact. The black-footed ferret is a perfect example of how a marriage of animal husbandry and scientific technology can help in species recovery.”

Black-footed ferrets once lived in the short- and middle-grass prairies of the western Great Plains. Today, they are an endangered species as the result of disease and a 98 percent loss of the North American prairie ecosystem. The Zoo has been a leader in black-footed ferret conservation since a small population was discovered in 1981. The last remaining 18 wild animals were captured between 1985 and 1987 to establish a breeding center in Wyoming. In 1988, the Zoo was the first to receive offspring from those 18 and breed black-footed ferrets outside of Wyoming. Since then, approximately 500 black-footed ferrets have been born at SCBI, and more than 200 have been reintroduced back into their natural habitat. About 1,000 exist in the wild today.

The SCBI works closely with the U.S. Fish and Wildlife Service to reintroduce ferrets back into the wild. The ferrets born this year will be sent this fall to the National Black-Footed Ferret Conservation Center in Colorado to prepare for release back into the wild, a process called “preconditioning.” Preconditioning involves familiarizing the animals with burrows (underground tunnels) to increase the chance that they will survive in the wild. The ferrets will then be reintroduced into various sites in the western Great Plains. Currently, there are 19 reintroduction sites that cover parts of Arizona, Colorado, Kansas, Montana, New Mexico, South Dakota, Utah, Wyoming, Mexico and Canada.

“The recovery of the black-footed ferret is an ongoing conservation success story that demonstrates the complexity of species survival,” Howard said. “Multiple factors, such as health, reproduction, grassland habitat and prey (prairie dog) availability are needed for ferrets to survive in the wild. If we lose the black-footed ferret, it will probably be due to the loss of the prairie ecosystem in North America. And nothing will ever be able to replace this magnificent species.”

One of the black-footed ferret litters born this year at SCBI can be viewed on the ferret webcam on the National Zoo’s website. Viewers can follow along as the mother, Thalia, cares for her three kits as they mature.