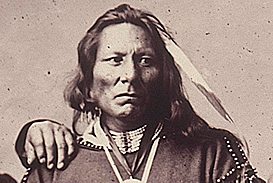 The Smithsonian’s National Museum of the American Indian presents “We Are a People: The Ponca Journey,” a free two-day festival featuring music, dance, play readings, a film screening and panel discussions with the Ponca Nation of Nebraska Friday, Oct. 7, from 11 a.m. to 10 p.m., and Saturday, Oct. 8, from 10:30 a.m. to 5 p.m.

In 1879, a full 75 years before the Supreme Court issued its monumental decision in Brown v. Board of Education, a Ponca chief named Standing Bear stood up, extended his hand, and made a speech: “This hand is not the color of yours, but if I pierce it, I shall feel pain. If you pierce your hand, you also feel pain. The blood that will flow from mine will be of the same color as yours. I am a man. The same God made us both.” Standing Bear’s argument convinced the federal judge to declare for the first time in the nation’s history that Native Americans are “persons” under federal law, a declaration that contradicted decades of Indian policy.

The Ponca Tribe of Nebraska invites the public to celebrate this monumental civil rights decision with dance and song, as well as panel discussions with tribal elders whose grandparents traveled the Ponca Trail of Tears. Visitors can listen as they share the story of their nation’s survival, from the tribe’s removal to Indian Territory in 1879 to its termination in 1962 to its restoration as a federally recognized tribe in 1990.

The festival kicks off Friday at 11 a.m. with the East Coast premiere of “Standing Bear’s Footsteps,” a 60-minute documentary that incorporates oral histories, rare photographs and contemporary interviews with members of the Ponca Nation to recount the historic trial of the famous Ponca chief. After the screening, the film’s Emmy-nominated and Peabody award-winning producer, director and writer, Christine Lesiak, will join several citizens of the Ponca Tribe of Nebraska to answer questions about the documentary and Ponca history.

On Friday at 1:30 p.m. in the museum’s Rasmuson Theater, Native law scholars will join the museum’s director, Kevin Gover (Pawnee), for “Fact or Fiction? The United States Courts’ Use of History to Shape Native Law Jurisprudence,” a symposium on the origins of American Indian laws and policies in U.S. courts.

The symposium will be webcast live at www.AmericanIndian.si.edu/webcasts. Following the symposium, the public is invited to a reception at 6 p.m. in the museum’s Potomac Atrium featuring Ponca songs and welcoming remarks from Gover, Ponca tribal chairwoman Rebecca White and U.S. Supreme Court Associate Justice Sonia Sotomayor.

On Saturday, there will be a reading and discussion with Joe Starita, a journalism professor at the University of Nebraska at Lincoln and author of “I Am a Man”: Chief Standing Bear’s Journey for Justice, a work of non-fiction that provides historical background of the famous Ponca chief. The festival closes with a panel discussion Saturday at 4 p.m. in the museum’s Rasmuson Theater featuring tribal elders who will discuss the Ponca Nation’s stories and culture.