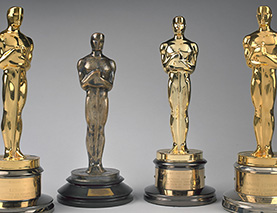 And the Oscar Goes to…the Smithsonian!

When she burst on to the Hollywood scene in 1932, Katharine Hepburn (1907-2003) was an instant screen success. She had a larger-than-life personality and a headstrong independence that announced a new kind of female presence in Hollywood’s heyday. Between 1932 and 1934, she made five films, including Morning Glory (1933), for which she won her first Best Actress Academy Award.

Despite being declared “box office poison” in 1938 after a series of poorly received films, Hepburn revived her career with her role in 1940’s The Philadelphia Story. She would go on to win three more Best Actress Academy Awards for Guess Who’s Coming to Dinner (1967), The Lion in Winter (1968) and On Golden Pond (1981). Her four wins in the Best Actress category are a record that holds to this day.

This portrait (1982) by her friend Everett Raymond Kinstler was said to be her favorite.

Hepburn’s Academy Awards and this portrait are on display in the Smithsonian’s National Portrait Gallery exhibition “20th Century Americans.”

The Oscar statuette was designed in 1927 by MGM art director Cedric Gibbons and sculpted by George Stanley. The figure stands on a film reel with five spokes, signifying the original branches of the Academyof Motion Picture Arts and Sciences: actors, directors, producers, technicians and writers. The pedestal was raised in 1945, giving the Oscar a height of 13½ inches; it weighs 8½ pounds. Rather than its original gold-plated bronze, it is now composed of the alloy britannia and coated in 24-karat gold.

These items are some of 137 million artifacts, works of art and specimens in the Smithsonian’s collection.