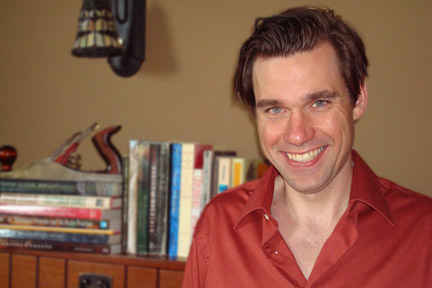 The editorial board of American Art, the Smithsonian American Art Museum’s peer-reviewed journal for new scholarship, has awarded the 2017 Patricia and Phillip Frost Essay Award to Peter Betjemann for his article “The Ends of Time: Abolition, Apocalypse, and Narrativity in Robert S. Duncanson’s Literary Paintings,” which appeared in the fall 2017 issue (vol. 31, no. 3). The jurors praised Betjemann for pushing “beyond the now-standard art-historical interpretations that see the artist translating literary sources into painted narratives that present idyllic scenes untouched by industry and the specter of slavery.”

The Frost Award recognizes excellent scholarship in the field of American art history by honoring an essay, published the previous year in American Art, that advances the understanding of the history of the arts in America and demonstrates original research and fresh ideas. The award, established in 2004, is presented annually to the author of the most distinguished contribution to the journal and carries a $1,000 prize. Funding for this award is made possible through the Patricia and Phillip Frost Endowment.

Each year, a jury of three members of the journal’s editorial board selects the winner from articles published in American Art during the previous calendar year. The 2017 jurors were Martin Berger, associate vice provost for academic affairs and professor of U.S. art and culture at the University of California, Santa Cruz; David Brody, associate professor of design studies at Parsons School of Design; and Rachael Z. DeLue, professor of art history at Princeton University.

The jurors wrote of the prize-winning article, “In Betjemann’s subtle and convincing reading, the painter was an active agent in contemporary debates over slavery, race, and citizenship. Through novel interpretations of Duncanson’s professional life, period conceptions of civility and taste, and close readings of popular engravings, literary works, and the artist’s landscape paintings, Betjemann’s article provides an altogether new way of understanding Duncanson and his art; enriches our understandings of how people of color intervened in the major debates of nineteenth-century America; and contributes significantly to considerations of the era’s literary painting, and thus models a fresh approach to analyzing the complex interrelationship of word and image in period visual culture.”

Betjemann is an associate professor of English and the director of the School of Writing, Literature, and Film at Oregon State University. He is the author of Talking Shop: The Language of Craft in an Age of Consumption (University of Virginia Press, 2011), and his articles have been featured in various publications such as Word and Image, American Literary Realism, the Hudson River Valley Review and the Journal of Design History. Currently, he is working on a book in which he argues that literary paintings before the Civil War excavated and expanded upon the sociopolitical nuance of their source texts in highly sophisticated ways, revealing painters as some of the most astute and piercing readers of their day. Betjemann received a doctorate (2004) and a master’s degree (1999) in English from Princeton University and a bachelor’s degree in English from Vassar College in 1995.

The journal American Art is part of the museum’s active publications program, which also includes books and exhibition catalogs. It is produced by the museum’s Research and Scholars Center, which also administers fellowships for predoctoral, postdoctoral and senior scholars and offers unparalleled research databases and extensive photographic collections documenting American art and artists.

Information about subscribing, purchasing single issues or submitting articles to the journal, which is co-published with the University of Chicago Press, is available online, www.press.uchicago.edu/ucp/journals/journal/amart.html. A complete list of past Frost Essay Award winners and additional information about the award are available on the museum’s website, americanart.si.edu/research/awards/frost.